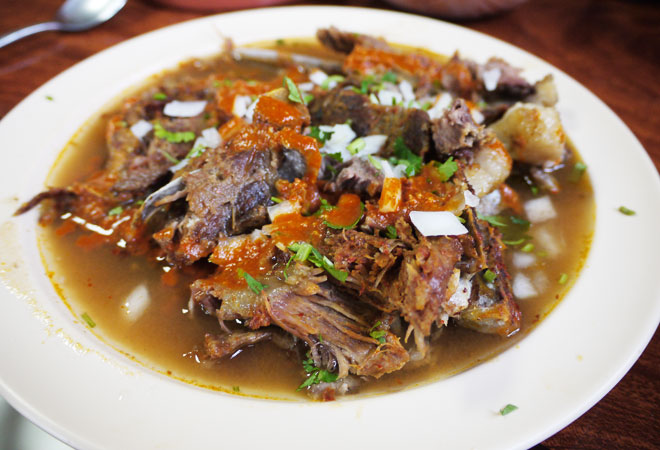 Javier Moreno learned to make birria, a traditional roasted goat dish, from his grandfather in Nochistlan, Zacatecas. At his Boyle Heights birrieria, Flor del Rio, Moreno has been specializing in this tradition for more than a decade.

In its purest form birria is cooked in a pit, but these days—on both sides of the border—it’s most often prepared in an oven on a rack. The drippings are then used to make the fragrant tomato and dried red chile sauce that’s poured over the meat.

The dish is actually named for the sauce—which translates to “a mess.” It can be done with any protein, such as the seafood version in Baja California, beef birria stewed in a stock pot, and a lamb version found in other parts of Central Mexico .

Flor del Rio is one of the most deeply rooted Mexican restaurants in Los Angeles, thriving here for more than ten years while serving just one item: birria de chivo. Moreno’s uncle runs a stand back home in Nochistlan’s central market executing the same recipe.

At Flor del Rio, Zacatecas-style young goat birria is roasted in the oven and brought to the table covered in sauce (you can order it dry, too), then paired with the classic condiments: cilantro, onion, a fiery salsa made with chile Yahualica (regional variety of chile de arbol), and corn tortillas made to order. In Jalisco, you’d get sliced radishes and other condiments, in Aguascalientes—oregano.

Ask for you birria plate “bien dorado” and it will arrive nicely crisped on a flattop, which provides added texture and flavor—there’s no attempt to hide the powerful goat gaminess here.

Birria is the type of food that is best done by a specialist. At a true birriera there should be nothing else on the menu—not carnitas, carne asada, or anything else. Flor del Rio is the best birria house in L.A., and one of the many unique restaurants that makes L.A.’s diverse Mexican food scene the country’s richest.