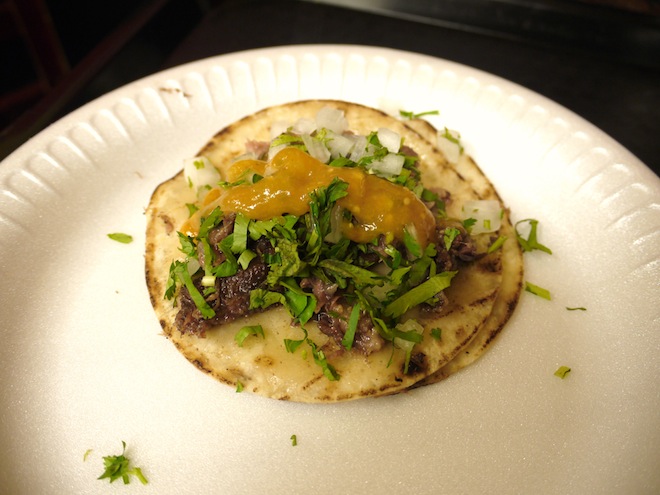 What I wouldn’t give for a taste of the cuisine from my family’s home state, Aguascaliente. A late night cenaduria, or supper house, serving red pozole, flautas of chile strips and cheese, and red enchiladas prepared with the provincial subtleties of local chiles, herbs and spices, and mannerisms of hidrocálidos (people from Aguascalientes) would take me right back.

There’s an elusive Tacos Aguascalientes truck that I’ve seen twice at gas stations. It drives away before I’ve been able to inquire about their menu, even though I suspect that it’s the tired Mexican-American routine of miscellaneous meats on a flat top. And there is Tortas Aguascalientes that’s never open, and makes generic sandwiches.

Just when I’d given up I came across Tacos El Negro recently, while driving home from a wedding in South Gate. Here, I found an Aguascalientes-style steamed beef head taco specialist within a fancy red, black, and yellow fast food restaurant paint job. It looks as established as the neighboring Subway.

There doesn’t seem to be a menu since they only have four items: tacos of beef cheeks, beef lips, beef head, and carne asada, which, here, is really just bistec, or steak. The lips (labios in Spanish) hold in a lot of juicy, beef flavor. They’re perfect on steamed tortillas with onions, cilantro, and a squirt or two of habanero salsa.

Sadly, I doubt Aguascalientes cuisine will become a trend. Still, outstanding tacos de labios in an authentic but accessible taqueria is paying more than lip service to the memory of my home state.