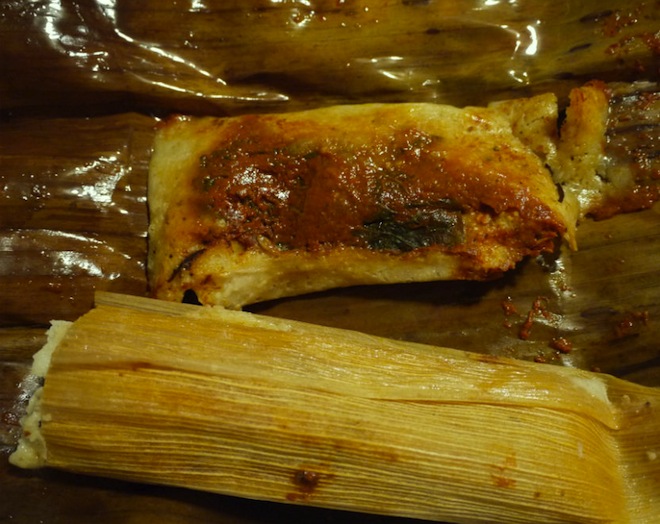 The regional cuisine of the Mexican state of Vera Cruz has hardly existed in Los Angeles. You’ll occasionally catch a token slot on a menu for pescado a la veracruzana, or Vera Cruz-style fish, made famous for its inclusion in cookbooks on both sides of the border. It’s also a standard seafood menu item in hotel restaurants in Mexico, and in Mexican-American restaurants here in the U.S.

There was a woman that made excellent tacos de guisado at Breed Street… And there’s the menu full of combo plates at kitschy Veracruzan Mi Ranchito, which really only has a few watered down dishes from their celebrated state cuisine.

Just when I’d given up on finding this rich cuisine in L.A., I happened across a woman selling tamales outside the Jon’s Supermarket on Santa Monica Boulevard at the corner of Hobart in Little Armenia, sounding the cry of the tamalera (tamale lady) to shoppers from across the parking lot: Tamales, atole (corn masa drink), tamales racnheros, tamales de mole!

Her tamales rancheros consist of shredded chicken soaked in a mélange of tomatoes, chipotle, morita, and ancho chiles bound by a banana leaf, intensely flavored by the aromatic hoja santa, or sacred leaf.

After working up an appetite shopping at Jon’s or any one the neighborhoods Oaxacan mini-markets, there’s no better way satisfy your hunger than standing out on the street, cradling a warm tamale from Little Armenia’s own tamale lady.