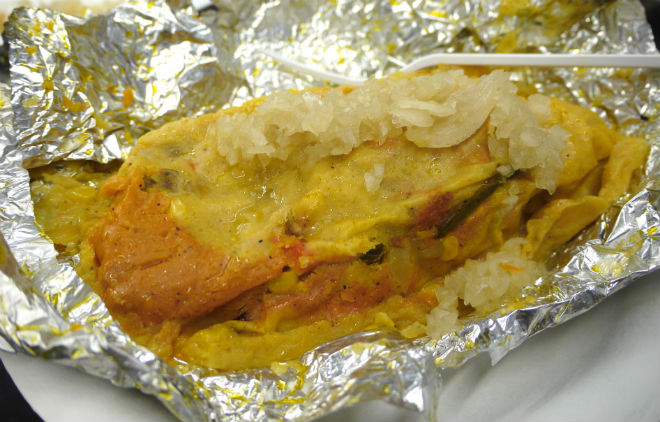 Today is Garifuna Settlement Day, which celebrates the day that the exiled Garifuna people arrived in Belize—one of several Central American countries where the Garifuna are found. Over this past weekend, there were a few events around South Central Los Angeles, where the Garifuna of L.A. sang, danced, and indulged in their cultural foods.

The Garifuna originated on the island of San Vincent, where West Africans mixed with Caribs and Arawaks to form one of the world’s rarest cultures. They were cast out of Saint Vincent by the British and now live in Belize, Honduras, Guatemala, and Nicaragua. Los Angeles also has a substantial population of Garifuna.

Belizean Garifuna have their own take on Belizean cuisine. More often than not, a feast or festival involves a kind of boiled chicken tamale.

You’ll have to wait until next November to get in on the Garifuna heritage festivities (which were held this past weekend), but all year around, Ella’s Belizean Restaurant is the best place in L.A. for Belizean cuisine—including those Belizean tamales that come from Belize’s Mayan heritage.

Carla Dawson prepares her tamales with love, vegetables, and a flavorful red recado (achiote paste). If you’re lucky, you’ll get a whole chicken leg inside the fragrant masa, that’s wrapped in banana leaves and boiled rather than steamed, as are most Central and South American tamales.

Make sure to ask for some spicy, pickled onion sauce to add another layer of flavor to these colorful, hearty tamales. This will ensure that you’ll leave saying, “belly full, boti glad”—that’s Belizean kriol for fat and happy.