Home Uncategorized Vinh Loi Tofu or: How I Learned to Stop Worrying and Love... 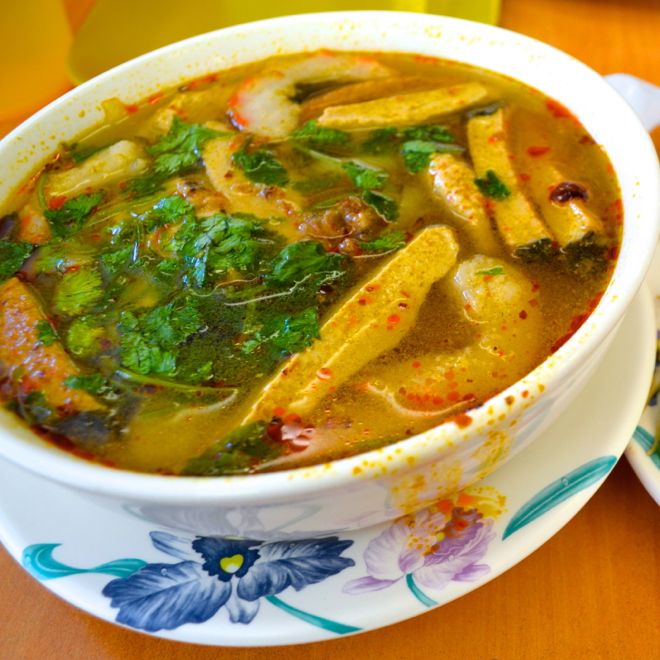 There was a time when I firmly believed that vegetarians and vegans with their mock meats were themselves a mockery to the culinary world. I distinctly recall being invited by a young lady who practiced veganism to a vegan Asian restaurant in Garden Grove. When it was time to give the waitress my order, I mockingly raised my fingers and put up air quotes as I requested the “duck.” Both my date and the waitress were visibly unamused by my mockery, and as a result, there were no more dates after that. Not even mock ones.

I’ve grown up a bit since then, but more importantly, I’ve found that many vegan foods, specifically vegan “meats,” have improved exponentially, incorporating tastier ingredients, creating more satisfying and more accurate textures, and somehow even mimicking the appearance of the animal proteins. No longer was I relegated to the “tastes like cardboard” vegan cuisine of the past.

And while I can appreciate a tempeh TV dinner from Real Food Daily now and again, there was something blocking me from taking certain vegan foods seriously. Take Vietnamese noodle soups, like beef or chicken pho, for instance. They rely on an intensely rich broth, steeped with the essence extracted from bones patiently simmered for hours in a massive pot that has, in some cases, brewed the same meaty potion for years. How do you come close to that with vegan sleight of hand? You don’t. But you can do it differently and still make it satisfying.

Vinh Loi Tofu, Vietnamese Vegan Restaurant & Tofu Factory in Reseda is, like many Asian culinary jewels around Los Angeles, located in a mini mall and outfitted with a dining room not quite large enough to seat the Duggar family. The wall behind the cash register was entirely paneled with food smut portraits of the eatery’s dishes, each framed like signed headshots or centerfold spreads. A proud row of running bling—Kevin Tran, the owner and chef, is an avid marathon man—dangled from the acoustic ceiling and swayed along with a parallel row of red, ornate paper lanterns as they all were buffeted by a portable fan set on high.

I, for one, was pleased with the fan’s cool circulated air since nobody bothered to let me know that the “extra spicy”sambal was fortified with an incendiary blend of Thai, habanero, and ghost pepper chiles. The added fire wasn’t necessary since the popular house special soup I ordered was plenty flavorful.

The soup comes in a regular-sized bowl (not as gluttonous as some massive house special bowls found at traditional Vietnamese restaurants) and is filled with generous amounts of vegan chicken, fish, and shrimp slices bathed in a pronounced peanut-based broth.

The chicken is tofu-based, firm and sweet. The sensation of meat came and went. As for the fish, nori makes up its “skin” with the flesh faked by spongy soy. The deceptive decapod, which even comes striped with a shrimp-y orange coloring, was formed with the help of tapioca starch and konjac powder. The firm texture was sort of close to shrimp, although a bit mealy, and the taste veered toward sweet.

As a meat eater, I found these “meats” to be placating my palate, even quite appealing. Fragrant cilantro brightened the soup and a fistful of raw bean sprouts that came on the side added an earthy depth. This was as hearty as any bowl of pho or other Vietnamese soup I’ve had. And I’m not trying to mock anybody here. Really.

This L.A. Restaurant Will Trade Its Food for Your Surplus Sriracha