Years ago, when Tom Sandoval was a struggling model, he was serving drinks at a party at the home of CAA cochairman Bryan Lourd, and Madonna bellied up to the bar. The Material Girl didn’t know what she wanted, so Sandoval created something for her he dubbed the “Red Devil”—a pinkish-red mix of booze and pomegranate juice.

“She took a sip and looked at me, and she’s like, ‘Oh, this is amazing,’ ” the Vanderpump Rules star and co-owner of WeHo’s Tom Tom recalls. “When all else fails, make [a drink] red or pink. … That’s one of the first tricks I learned as a bartender.”

When it comes to cocktails, Sandoval says color is key. If you happen to be having an aloha-themed holiday party—rather than mixing drinks at the home of a super agent—go for blue.

“You can’t have a tiki bar without having a blue drink,” says Sandoval, shaking up an azure-colored libation on the set of a photo shoot for Los Angeles.

The drink is featured in a new book Sandoval coauthored with his longtime girlfriend and castmate, Ariana Madix. Fancy AF Cocktails is a playful collection of recipes for refreshments both classy, such as the Going Clear, a riff on a Manhattan made with clear whiskey, and trashy, like the Survivalist, a mix of tequila, maple syrup, and Tabasco and Taco Bell Fire sauces.

It comes out December 3, about a month before Vanderpump Rules’ eighth season bows January 7 on Bravo. The series started as a spin-off of The Real Housewives of Beverly Hills—the stars supposedly work at Lisa Vanderpump’s SUR restaurant—but it quickly grew beyond the shadow of the originator with a delightfully dramatic, unself-conscious cast. Everyone from Roxane Gay to Jennifer Lawrence enjoys its lowbrow charms, and Vogue has hailed it as “America’s Perfect Reality Show.”

Madix and Sandoval serve as a sort of moral center to a West Hollywood enclave jiggling with sex, betrayal, Vanderpump’s purse dogs, and general pettiness. Beneath the brotox, Sandoval is an eager, earnest good guy from St. Louis who loves his mom’s Christmas cookies. Madix was a Silver Lake girl before she shacked up with Tom, and she exudes intelligence and calm on a show often lacking both.

The new season finds the two leaving WeHo. In February the couple closed on a $2 million, 4,500-square-foot farmhouse-style home with a pool in Valley Village. It’s quite an upgrade from their notoriously unglamorous apartment, where they couldn’t run the toaster and window air conditioner at the same time. Some of their cast members—blissfully ignorant newlyweds Jax Taylor and Brittany Cartwright, and constantly bickering marrieds Tom Schwartz and Katie Maloney Schwartz—have also bought in the area, but Madix
insists that the show won’t be short on drama even though many of them have settled down and moved—gasp—to the Valley. “Nothing has changed,” she says.

And just because the two of them have purchased a home, don’t expect an engagement
announcement.

“I would have a nervous breakdown [if I had to plan a wedding],” Madix says. “Every month when I pay my half of the mortgage, consider that my commitment to you, Tom.”

The couple is still settling
into their new digs, but they
love having a home gym and a king-size bed with a moss-green velvet frame.

But it hasn’t all been bliss. The two have had some differing opinions on decor issues, especially in the living room.

“Tom keeps wanting to add all these bright colors, and I want to bring the outside in,” says Madix, who loves plants and flowers. “We’re figuring it out.”

Such is the couple’s dynamic.

“Yeah, yeah, and I’m the ringleader of the circus,” she adds. 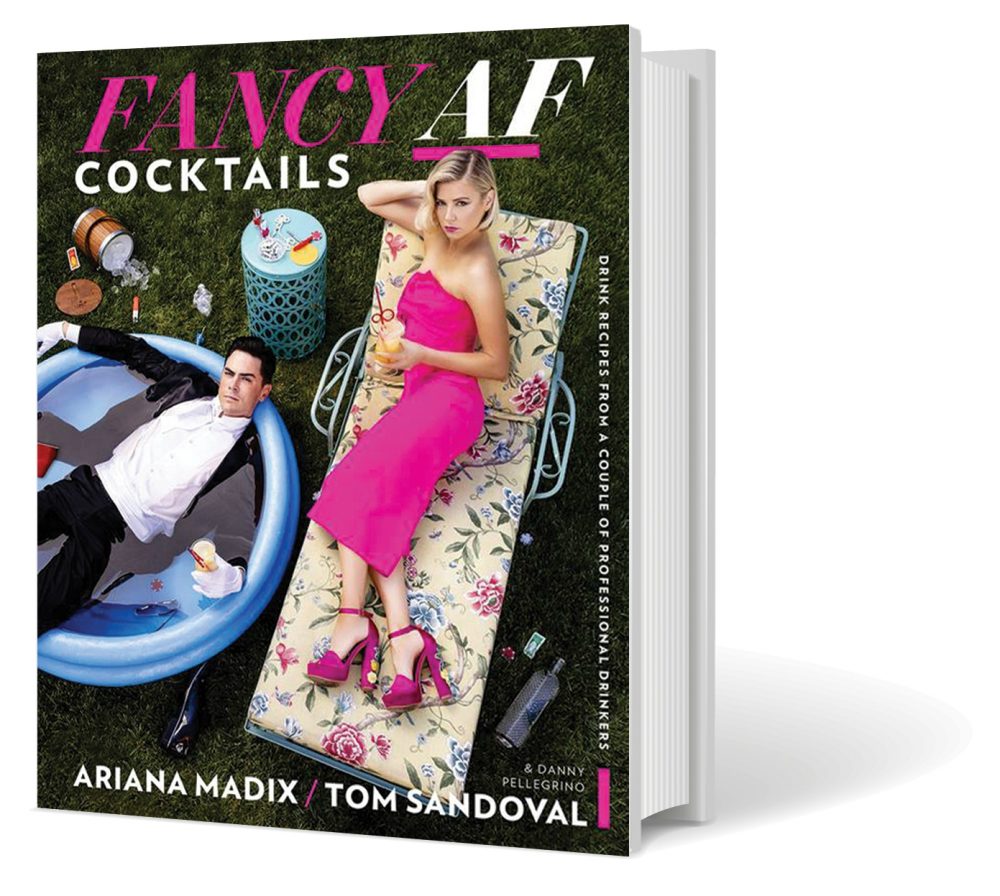 “This one looks like Barbicide, but I promise it tastes better,” says Sandoval
of this colorful cocktail.

In a cocktail shaker, mix the vodka, Curaçao, coconut water, and pineapple, guava, and
lemon juices. Fill the remainder of the shaker with ice. Shake and strain into a tall glass filled with fresh ice. Garnish with the rosemary and lime. Serves one.

RELATED: Vanderpump Rules Is the Anti-Housewives in the Best Way

Inside Trixie Mattel’s Launch Party for Her Motel Makeover Show