Home Dining The Valley’s New Petit Trois Might Be the Most French Restaurant in... 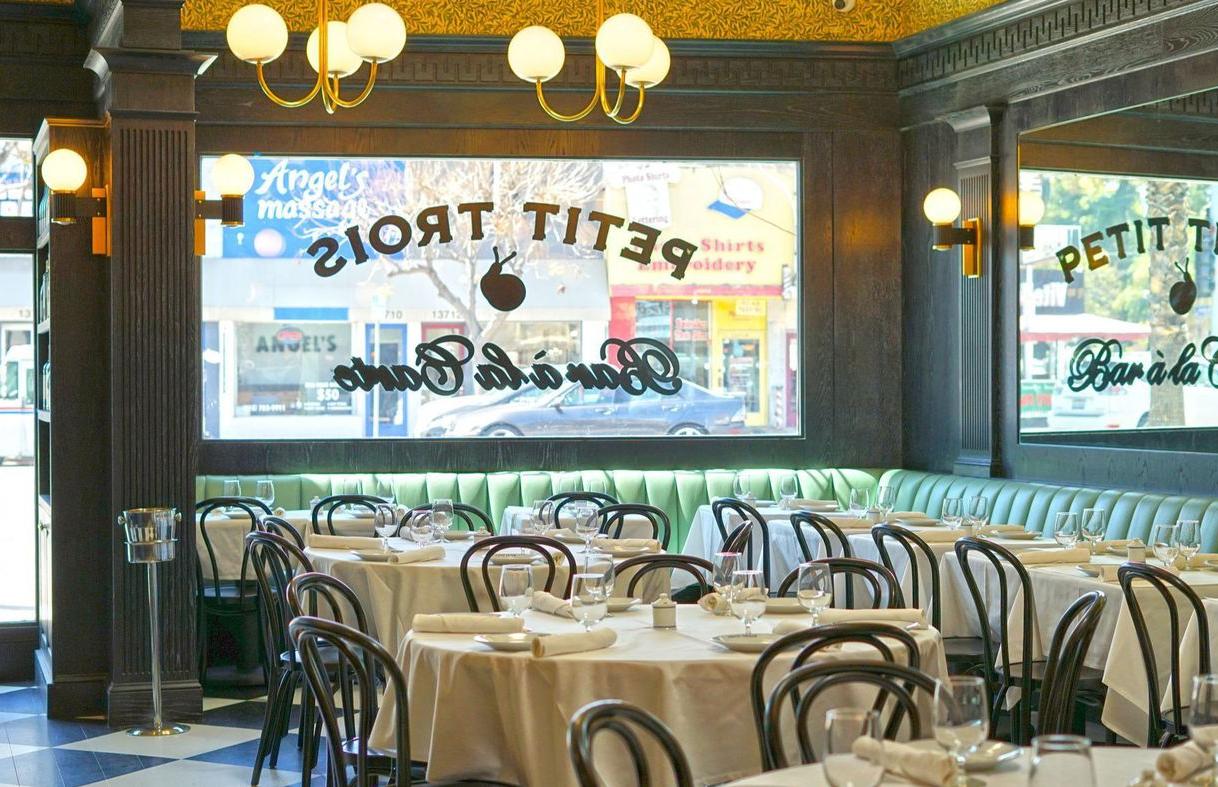 Those blank sheets of fabric aren’t a common sight in restaurants these days, but at Petit Trois Le Valley, the long-awaited expansion of Lefebvre’s tiny French bistro opened in 2014 with partners Jon Shook and Vinny Dotolo, they serve as a statement of purpose.

“I wanted everything to be classic French.” says Lefevre, looking out from the restaurant’s European brigade-style kitchen. ““You sit in a banquette and you feel like you’re in Paris. We just need to build a fake Eiffel Tower across the street.”

With around 100 seats, including bar seating, a private dining room, and forthcoming patio seating, Petit Trois Le Valley is Lefebvre’s biggest restaurant yet; larger, in fact, than all his three previous establishments combined. It might also be his most ambitiously French. Serving breakfast, lunch, and dinner, the menu includes many of the bistro staples made famous at the original Petit Trois in Hollywood—buttery escargot,  steak frites, paté de campagne—as well as new additions like beef bourguignon, Niçoise salad, and pan-seared Parisian gnocchi. “There were so many dishes from France I wanted to do,” he says. “When I wrote the first draft of the menu it was six pages long. We’re going to have a lot of nightly specials.”

During breakfast hours, you can expect Lefebvre’s famed Boursin-filled omelet, as well as waffles with Parisian ham and Gruyère baked inside, smoked salmon tartines, eggs Meurette (soft-poached in red wine), and an American cheese-topped breakfast sandwich with bechamel sauce called the “Mec Muffin.” Pastry chef and recent Nashville transplant Rachel De Jong will be heading a robust pâtisserie program offering everything from pain aux raisin and Paris-Brest to canelés and croissants (surprisingly, this is the first time Lefebvre’s restaurants have offered a croissant; anticipation is high). Other distinctive Gallic touches abound. Small ceramic jars of Dijon sit on each table; there’s Kronenbourg 1664 on tap and an expansive list of aperitifs and digestifs; waiters wear black bowties and white button downs. Soon Lefebvre hopes to roll out a classic dessert cart, and offer dishes plated table side like sole Meunière and steak Diane.

Parked on a busy stretch of Ventura Boulevard, the arrival of Petit Trois marks a huge moment in the San Fernando Valley’s nascent restaurant scene, but it’s also something of a litmus test. “When we opened the first Petit Trois I was totally surprised by the level of success,” says Lefebvre. “We are hoping it’s the same in the Valley, but we have no idea. It’s an exciting place right now.”

If nothing else, Lefebvre will have a short commute: he and his wife Krissy, along with their two children, live nearby (close enough that the Burgundy-born chef now bikes to work). They envision the restaurant as an all-day neighborhood destination, with room for large parties and families with kids in ways that weren’t always possible at the shoebox-sized Petit Trois on Highland Avenue. “You can sit down at a table and have a conversation with four people now, which is nice” says Krissy.

There are eventual plans to turn the space next door into a French market and bakery (with rotisserie chickens spinning in the front window), but for now Lefebvre is focused on making Le Valley the most compelling French restaurant in Los Angeles, a place whose ambiance conjures up memories of lively Parisian haunts like Brasserie Lipp and Chez L’Ami Louis. “This is really my dream restaurant,” says Lefebvre. “The longer I cook the more I want to focus on French food and food that I grew up with. When I first started as a chef in Burgundy, this was the kind of spot I imagined opening someday.”