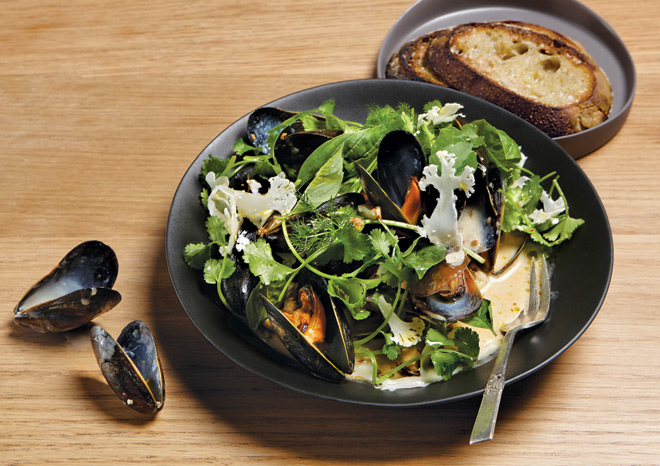 Things don’t get much simpler than the grilled mushrooms at Hinoki & the Bird. Slightly redolent of Japanese binchotan charcoal, they’re garnished with sea salt and a wedge of lime before landing at the table on a matte black plate. More than good, they say pretty much all you need to know about David Myers’s new restaurant. That’s a bit of a paradox, given its subterranean setting at the Century, the luxury tower designed by Robert A.M. Stern (Candy Spelling plunked down $35 million for one of the condos). A curving driveway descends to the entrance, where a valet in a tan suit instructs you to tug on the polished grooved expanse that looks like a wall but is actually the door. Subtle grandeur is not what the development is about.

Inside, however, Myers has put his shoulder into keeping matters relaxed in this homage to the izakaya. Reclaimed planks wrap the room, sanded-smooth chairs ring the unadorned tables, and on an enclosed patio ergonomic banquettes have been draped with lengths of quilted denim. In the open kitchen executive chef Kuniko Yagi (who once worked in Tokyo’s financial sector and appeared on last season’s Top Chef) wipes down a bowl bearing a steak tartare energized with diced pickled jalapeño before it’s delivered to a throng of customers. Agents who’ve wandered over from CAA with loosened ties drink Auchentoshan single malt from tumblers at the bar. A well-tailored woman talks of alternating months spent here and in Hong Kong. Nearby, a trio commiserates over office politics and downs cool drafts of Stone pale ale as a food runner in a denim shirt and jeans places a sambal-crusted skate wing in front of them.

The place may be a bit too self-conscious and elegant to pass for a Japanese pub (the rich leather of the clipboard menu could have been pried from the interior of an Aston Martin), but so what? Focused and direct without being blandly reverential, Hinoki & the Bird is gastronomic enough to be a destination restaurant without being so overwrought that it loses the everyday feel it’s striving for. Set against the modern glass and steel of Century City—a neighborhood that has the look, albeit not the incandescence of Tokyo’s Roppongi District—the interior sets the tone for an upbeat exploration of lore and tradition.

Raised in Cincinnati, Myers wields an extensive background that’s equal parts haute and French, though not necessarily at the same time. After briefly studying international business at Ohio State University, he decided he wanted to cook, working for Chicago’s Charlie Trotter and moving on to Daniel Boulud in New York. He went west in 2000 for a stint at Joachim Splichal’s Patina when it was on Melrose and helmed his first restaurant in the early aughts with the launch of Jaan in the Raffles L’Ermitage on Burton Way. Then came Sona, Myers’s attempt to create a temple of gastronomy inside a cottage on La Cienega. I loved the restaurant, where the unrelenting creativity of the food sought to pull down barriers; hamachi might arrive sheathed in burrata. But Sona provided few junctures at which you could catch your breath. It closed after an eight-year run—not, however, before Myers managed to splice the classicism of his training with a more informal approach at Pizzeria Ortica, the Orange County favorite, and Comme Ça, the Melrose spot that he has since spun off to Vegas.

Though there’s not much in Myers’s CV that would have made Hinoki & the Bird an obvious venture for the chef, you could argue that Sona’s minimalist space, a pale cube of a room with sparsely dressed tables and a ritualistic formality, had a Japanese influence. And despite Comme Ça’s brasserie menu of mussels, terrines, and steak frites, Myers often strips dishes of ornamentation to the point that they recall the clean lines of Japanese cooking. When the paleron braisé arrives—a tender haunch that sits alone, bathed in a silky red wine sauce—you half expect to hear someone hit a gong.

At Hinoki & the Bird, he has flipped the equation, putting his admiration for the food of Japan, and for Southeast Asia, on the front burner, stashing his classical tendencies on the back. Myers sees the image of a bird alighting on the branch of the treasured hinoki tree as a symbol of cultural fluidity. An ersatz version of the wood is even used for the restaurant’s business cards, but a smoldering sheet of the real stuff leans against the black cod like a miniature ember, adding a soulful accent to the perfectly lacquered fish. To me, it illustrates how there can be a final lingering note beyond resolution. I was so taken with the scent that I tucked a shard of the wood in my sock drawer.

The same powerful simplicity drives the side dish of yaki onigiri—grilled organic rice balls whose charred crust gives way to an almost creamy lushness. A platter of unpeeled pickled carrots and daikon slices needs only a few chunks of sesame-sprinkled mango for contrast. Crisp calamari seem too pedestrian—until you dip them in the accompanying tomato jam that’s heady with the smokiness of ajwain, a spice popular in Singapore. In the past, if Myers served raw scallops, they probably would have been given a sashimi interpretation: sliced thin, presented with a bouquet of microgreens, shaved Meyer lemon peel, and dots of sauce. The irony is that here he goes in another direction, leaving the flesh in hunks and mingling it with grapefruit sections and a smattering of puffed rice. The end result of sluicing the marine flavors with citrus is no less powerful; Myers just gets to the point in three fewer steps.

Pan-Asian restaurants often suffer from being a little too “pan,” losing the spirit of the food in their attempt to bring an entire hemisphere under one roof. While the lobster roll crosses more latitudes than it should—an American classic filled with green curry-infused lobster meat (Thai) and put into a bun darkened with coal dust (modern Basque)—it’s an exception. Myers, who has traveled extensively in Asia, is capable of modifying without denaturing, shoals in which so many others have run aground. The chili-crab toast is a user-friendly version of the bib-requiring specialty from Singapore. Safer? Yes, but heaped warm on grilled bread and sharpened with spices, the tender Dungeness flesh still casts ceremony aside to communicate a lusty way of eating with each fiery bite. There’s also room for bowls of pho-like, herb-crowned curried mussels and fried oysters, whose tidal notes are gorgeously framed by a dipping sauce of aioli jacked with Vietnam’s pungent black garlic paste. Toss in market touches such as tiny, oven-crisp peewee potatoes—the kind that have created a cult following for Weiser Family Farms—and you have a restaurant that for all its foreignness could be called modern Californian.

There’s no need to revamp anything with the grilled Scottish salmon, which is cut thick enough to hold up to the lick of the flame; paired with braised shiitake caps, the hit of the salty paste known as yuzu kosho goes off like an umami flare in the mouth. The barbecued pork neck—its caramelized edges evoking some diabolically good version of tonkatsu—calls for steamed mustard greens to provide herbal acidity. Japan’s passion for root vegetables (often pickled) gets expressed in pureed pumpkin dabbed on toast. All undulating rises and hollows, the rough, golden schmear presents the ideal platform for receiving a potent miso jam and dollops of chèvre, which bring everything into focus.

Myers doesn’t always reach those heights—delicious on the pumpkin, the miso hardly exerts its magic when doused over mochi balls—but time and again the unrelenting consideration of basic ingredients takes Hinoki & the Bird into the realm of halftones with which Myers has made his reputation. A pile of brioche doughnuts dusted with sugar-flecked matcha is presented alongside a bowl of soupy white koji rice. We’re at the diamond tip of a culture here—koji (or Aspergillus oryzae) is a fungus used for thousands of years in Japan to ferment mirin, shochu, rice wine, and soy—and yet Myers keeps things playful. That’s not a mood he’s gravitated to before. I watched him one night moving among people slurping coconut broth and toasting with Hibiki whiskey and feeding babies in high chairs; it was about as far from Sona as I could imagine. He’d shot for perfection back then, but it is in this kind of imperfect perfection that he seems most at home.

Kid Friendly?
Sure, why not?