Home Food & Drink The Understated Perfection of the Biscuit 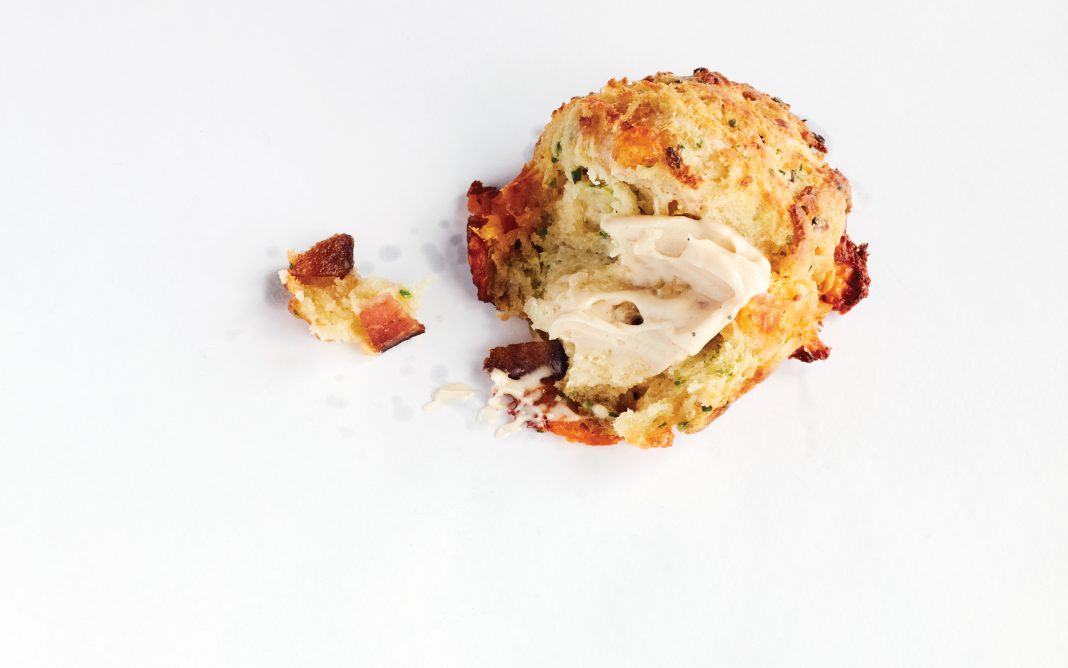 The gravy that Beth Kellerhals makes for her biscuits at the weekly pop-up restaurant at Crawfords, an oft-crowded bar in the Westlake district, is both timeless and inventive: Slightly pearlescent, its base is a puree of onions cooked down in PBR. As for the biscuits themselves, Kellerhals mixes in a little cream with the standard buttermilk before shaping them with a pastry cutter she never got around to returning to an old boyfriend. For biscuits, that’s about as dramatic as things get. Biscuits pack a homey simplicity that few other foods do, whether served by Crawfords’ pool table, alongside a reposado cocktail beneath the strings of bulbs at Everson Royce Bar in the Arts District, or by the fire pit at Citizen in Beverly Hills, where you can partner them with a smidge of chipotle-tinged syrup.

Chef David LeFevre was an early adopter among the recent wave of local chefs to embrace the American classic. He’s been serving biscuits at his Manhattan Beach restaurant M.B. Post since it opened in 2011. Infused with diced Tillamook cheddar and crackling bits of Nueske’s applewood-smoked bacon, they pick up where his mom’s biscuit recipe left off. Crusty and bounteous, they release a cloud of steam when you break them open to slather on some maple butter. “I want my food to have soul,” says LeFevre, “and biscuits define it.”

Like so many of our legacy foods (see: cured ham, grits, and bourbon), the tradition of biscuits has been preserved in the ark of Southern cooking—a staple in the chandeliered dining room manse as well as on the sharecropper’s table. Until the middle of the 19th century, getting dough to rise required using a leavening starter (basically a yeasty sludge saved for that purpose). It’s hard to imagine how liberating it was when people figured out they could add springiness to rolls with a few teaspoons of Clabber Girl baking powder.

From there possibilities spread out as bakers took positions on whether suet, Crisco, or butter was the ideal form of shortening to add richness—with lard being the most legitimately Southern. In theory, I don’t like biscuits lavishly rich, yet my kids and I still talk about the first time we tasted the ones at the Hart and the Hunter, their golden layers recalling the world’s most buttery croissant. Some folks bake them close together so that when you cut them apart, there’s no crust on the sides. That’s fine. I don’t even mind the heavier dry biscuits that are normally topped with gravy. When you’re going to cover them in a peppery sauce thickened with a roux of rendered sausage, flour, and whole milk, you want a slightly dry crumb.

But in all honesty, as good as some local renditions are, I don’t think people are very picky about their biscuits. The opening pop of a roll of Pillsbury Grands is enough to conjure cozy memories. Combining luxury and thrift and a bit of nostalgia, maybe biscuits are having their moment because they create their own kind of moment when they land on the table. In a stressed, overextended world where just keeping up with your passwords is a slog, the simplicity of a biscuit has resonance. If you’re in Hollywood, the kind served as part of the breakfast combo at Salt’s Cure is darned good.