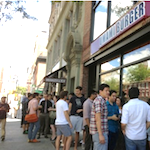 There are over 1,000 places in New York City that serve a burger. But this has not stopped New Yorkers from waiting in line for up to three hours in order to be among the first to taste the burgers from L.A.-based Umami Burger, now open in Greenwich Village.

The menu at Umami Burger New York is essentially the same as it is in L.A. The truffle burger, Manly Burger, and classic Umami Burger are all on the list. But there are a few notable differences: the Village location has a special sort of ordering system (more on that later), makes its buns in house (in L.A., the buns are made by a local Portuguese bakery), and has a full liquor license.

Now that Adam Fleischman’s empire has officially oozed over onto the East Coast, the Yelpers and critics are having a field day. Can’t blame them, really. This is probably the best thing to happen to New York since the cronut.

➼ Maki Y. admits to Yelp: “I don’t know what has become of me. First I waited in line for cronuts last month and now I’ve waited in line for the first Umami Burger in NYC (on its first day of business, no less). I hardly ever wait in lines like this.”

➼ JulesTei reports on Chowhound: “The best part of the whole experience were the sauces. Potatoes came with some kind of garlic aioli that I would have licked off the plate and they gave us a bottle of their special ketchup to squirt on whatever we wanted. I don’t ever want to go back to regular ketchup after this.”

➼ Yana B. informs Yelp of Umami NY’s interesting new service system: “They have a pretty cute wait list system – you put your name down and receive a link where you can see how long you’ve been waiting and what the current wait time is. Then they text you when the table is ready. Yesterday around dinner, the wait was 2 1/2 hours but I’m sure it’s just because it’s the second day after opening.”

➼ Jia J. writes a five-star tome to Umami and finishes with this prediction: “Umami Burger may very well give Shake Shack a serious run for its money because of its excellent, personal service and less trough-like atmosphere and clean burning taste – all for barely a few dollars more. And those cocktails! Those pickles! That tea!”

➼ Former Villiage Voice critic Robert Sietsema posted his thoughts on Eater New York. He had some trouble with the patty: “The burger and bun tasted great, the meat juicy and pink, and improved with the wonderful aioli. There was only one technical problem — the burger patty did not cohere, and had soon broken up into a sort of sloppy joe that the bun could not contain. I was reduced to picking up fragments of the tasty beef with my fingers. I think this is a fat problem — the patty needs more of it.”

But Sietsema loved the fries: “The fries, however, were the most perfect fries of the species known in Jersey as “disco fries.” They were dotted with way-smoky chunks of bacon, fried onion tendrils crunchier than onion rings, and what might have been actual Cheez Whiz.”

➼ Condé Nast Traveler critic Krissanne Alcantara, on the other hand, is less than thrilled. “But was it the best burger ever? Was it worth the three-hour wait? I would say no and no. Both burgers were fantastic and flavorful and exciting. Game-changing, even. But neither were the best I’d ever tried … Bottom line? I really liked Umami Burger and I’m thrilled they’ve come to the East Coast. But call me when In-N-Out comes to town.”

➼ Thrillist, predictably, goes gaga for the stuff. One burger in particular gets a lot of love: “This Truffle Burger, like Paris Hilton, is simple and rich. Topped just with house truffle cheese and a truffle glaze (BYO Truffle Shuffle), it’s an ‘excellent wine burger’…”

Fleischman himself has been too busy to comment (understandably), but Umami spokesperson Brian Rosman told The Daily News: “There are a lot of great burgers here but nothing like us. Once they try us, New Yorkers are going to rethink what a burger can be.”

➼ Also worth noting, for no reason in particular: The Cronut Umami Burger [First We Feast]

Every Burger at Umami Burger, Ranked