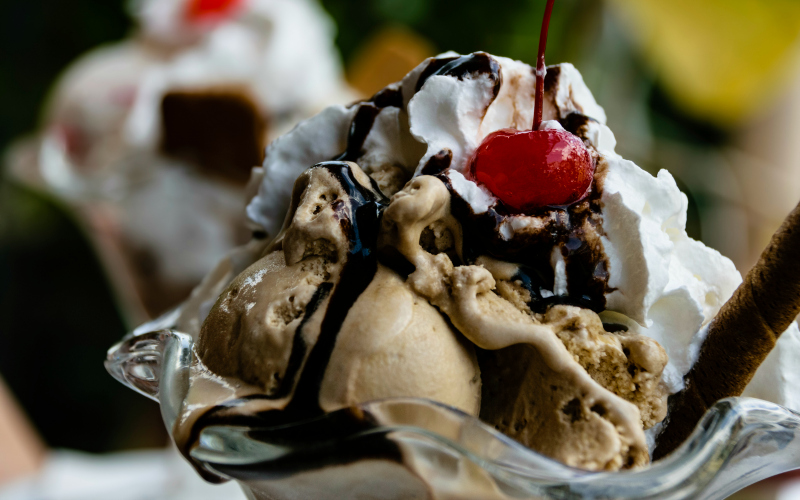 Nowhere in L.A. offers a denser concentration of historic soda fountains than the small stretch of suburbia between South Pasadena and Alhambra. The oldest, Fair Oaks Pharmacy, opened in 1915 and is known for vanilla phosphates and hand-dipped shakes. A few miles away, Fosselman’s Ice Cream (which debuted in 1924), has added flavors like green tea over its near-century in operation, but it’s the cartoonishly large banana splits that draw raves.

Then there’s Twohey’s Restaurant, the beloved diner on Atlantic whose history is shorter (it’s merely 75 years old) but more colorful. Twohey’s signature is a hamburger called the Original Stinko, which comes dressed with thick slices of onion and pickle. The neon sign is a local landmark: a weeping bald man with a clothespin pinching his nose. But it’s widely acknowledged that the best part of Twohey’s is the soda fountain—specifically, its legendary sundae smothered in bittersweet, dark-as-midnight hot fudge, and a thick furl of whipped cream. Does it have roasted almonds and a maraschino cherry? Of course. When a sleek, modernized offshoot called Twohey’s Tavern launched in East Pasadena in November, the menu included updated takes on classics like ham steak and beef stew. But the sundae remains gloriously unchanged. Some things just can’t be improved upon.

Even still, nothing lasts forever. It was announced in December that the lease on the original Twohey’s location was not renewed and, on February 1, 2018, the long-running diner will close for good. (1224 N. Atlantic Blvd., Alhambra, twoheys.com)