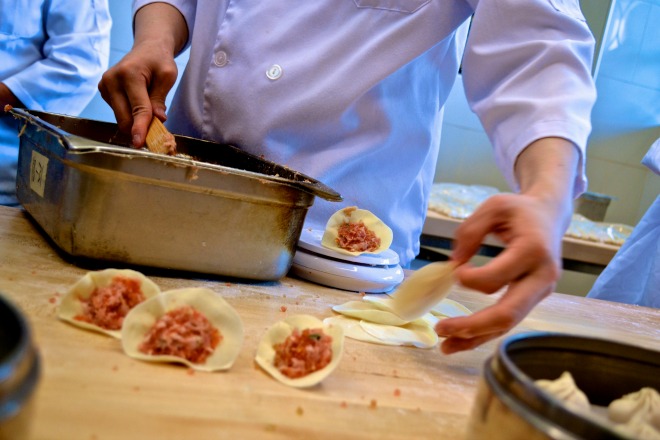 This morning, under scattered clouds and cool temperatures, Frank and Joanne Yang, the owners of Din Tai Fung, and Rick Caruso, Founder & CEO of Caruso Affiliated which owns and operates The Americana at Brand, gathered with friends, family, and media to officially unveil the newest addition to the Din Tai Fung international restaurant chain. What started in 1972 as a small dumpling house has grown into an international sensation.

Once the massive ribbon was sliced in two, I got to check out Din Tai Fung’s sleek interior. Copiously appointed with granite and teak, it’s a stunner. Without a doubt, the attention getter is the viewing window looking into the dumpling making station. There, half a dozen dumpling elves huddle over a stainless steel table, rolling, filling, pressing and pumping out xiao long bao, “little dragon dumplings,” and many other juicy packages at a clip of about five per minute. The window is embellished with tan circular designs which resemble the view, overhead, of an open bamboo steamer.

As at other dumpling establishments around the city, soy sauce, aged black vinegar, chili oil, and, lovely fresh slivers of ginger await hungry diners at each table.

For the first time ever, Din Tai Fung unveiled a signature dumpling at it’s new location. Stuffed with black truffles, it’s a soup dumpling like no other. The flavor is not overpowering and blends harmoniously with the moist pork filling.

Caruso announced at this morning’s grand opening event that his goal was to increase diversity and quality among the restaurant offerings at The Americana at Brand. The idea is to make offerings appealing for guests to dine at his shopping destinations more than once a day. Din Tai Fung’s place at The Americana continues that strategy.

When I asked founder Frank Yang if he ever thought his humble steamed dumpling and noodle restaurant would become such phenomenon, he replied, “Very hard to imagine.”

Look for more pot stickers at this new Din Tai Fung. Traditional ingredients, such as yellow leek, are being sourced locally where possible. There is also a full bar and bar menu ― a first for Southern California-based Din Tai Fungs. Cheers and ganbie to that!