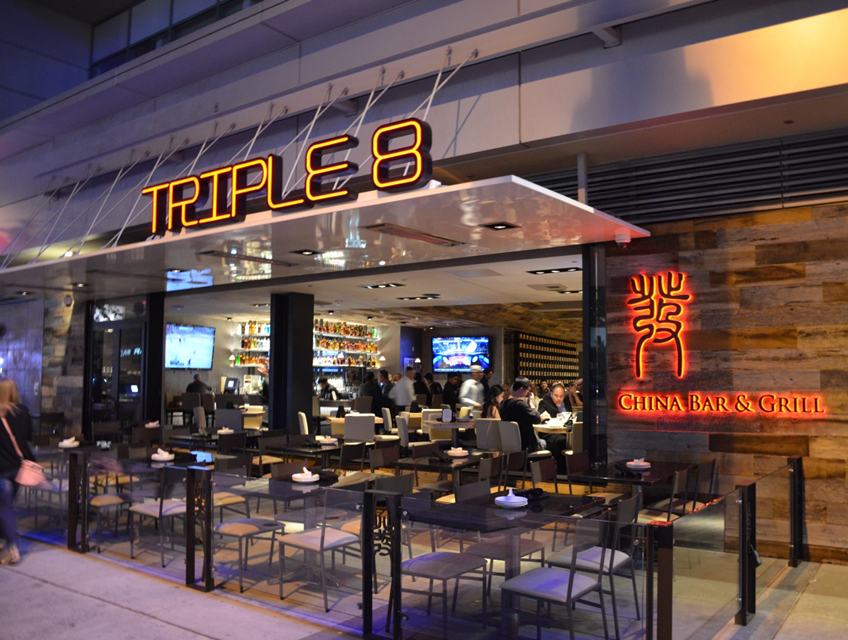 Quietly building an expansive restaurant portfolio from its Monterey Park home office, M2K Group (which is code for the two principals Michael Kwan and Kerry Moy) centers many of its concepts within the perimeter of Downtown Los Angeles.

Only a few walkable blocks from each other are several M2K restaurants, like the casual sushi bar and cocktail lounge Wokcano; a meat and seafood-centric venue helmed by chef Greg Paul called Spear that hands out bone marrow with each steak and tomahawk pork chop; Bunker Hill Bar & Grill, a tapas-style sports bar in the heart of the Financial District; and 3rd Generation, a sake bar serving up bowls of 72-hour pork bone broth ramen and sushi. M2K’s most ambitious concept Monkee, a modern Cantonese seafood restaurant, debuts downtown this fall, further fortifying its stronghold in the center of the city.

The group’s newest restaurant Triple 8 sits front and center at the L.A. Live entertainment complex where Trader Vic’s formerly resided. All evidence of the kitschy Polynesian tiki bar has been erased and replaced by a clean, modern, open setting of 8,500 square feet that’s been accented with fresh pine and reclaimed timber.

At the very rear of Triple 8 is the glass-encased kitchen, framing clear views of the cooking action. Off to the kitchen’s right is a nook where dumpling masters fold and crimp xiao long bao, har gow, siu mai, and other deftly wrapped bites while you watch—similar to showcase kitchens in other dumpling restaurants, notably Din Tai Fung. (One of Triple 8’s goals is to outdo Din Tai Fung’s xiao long baos—a formidable yet delicious ambition if there ever was one.)

Triple 8’s selection of freshly fashioned dim sum and dumplings should be a big attraction downtown, although not as vast in choices as your usual dim sum palace.

Triple 8’s seafood garlic noodles quite possibly beats Crustacean’s famous garlic noodles at their own game while other must-eats include a pillowy tender black pepper mignon beef and a perfectly seasoned Hunan style lamb tenderloin that ignites with cumin and garlic. The A3-rated Wagyu is pretty great, too, if you want to go full luxury, and the braised sea bass was tender, boneless, and unctuous.

Despite its L.A. Live locale, Triple 8 is certainly not another P.F. Chang’s. Simply having options in the soup section, like ginseng silky chicken or crabmeat and fish maw, is an act of bravery that doesn’t scream “mainstream.”