Home Uncategorized Toque Talk: A Chat With Laurent Quenioux on His Latest Gig 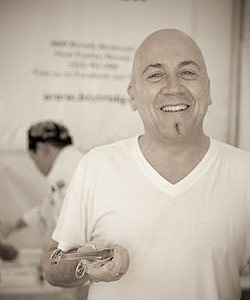 Vertical Wine Bistro  has a doozy of a new chef in Laurent Quenioux, the man behind the radical Bistro LQ  on Beverly and formerly of Pasadena’s Bistro K. We got the chance to chat with the daring Frenchman about the move, his new menu, and the reason he loves the San Gabriel Valley so darn much. (Hint: It involves blood—a lot of blood.)

So congrats on the new project! When, exactly, did you take over the Vertical kitchen?
We’d been talking for the last two months. I think, for me, it’s great going back to the San Gabriel Valley, which I love so much. Not everybody does, but I do. Vertical gives us an outpost over there for our regular customers that we used to have at Bistro K. They can come and try some of our dishes, but they don’t have to drive all the way to Beverly Boulevard. We’re giving the opportunity to the folks over there the chance to try the landmark dishes from Bistro LQ.

Yes, yes, of course. This is just something different. We really want to add the flare of Bistro LQ over there but we don’t want to take away the personality and the charisma of Vertical as a wine bistro. We’re not going to create Bistro LQ 2. We’re just going to add some of the dishes, ideas, creativity and sometimes a bit of my avant-garde sensibility, as well.

This is still Pasadena, though. It might be an incorrect stereotype, but the dining scene there isn’t known for being particularly adventurous. Are you still going to be serving headcheese and lamb kidneys?
We know our clientele here—it’s more conservative, definitely. We will still try things from time to time on tasting menus or as specials, but we’re not going to recreate what we’re doing at Bistro LQ. But to be honest when I was at Bistro K, the clientele would try anything and everything. But at Vertical, again, it’s a different personality. We do have sweetbreads on the menu. We’ll try from time to time and see how people react. The flavors are really more Bistro LQ-like, but the meat and the protein are not as avant-garde or as adventurous.

What are you doing to take advantage of the wine emphasis?
We have a huge bar menu that’s very popular, and we want to expand on Vertical’s huge cheese program. But the charcuterie is going to be pretty intense. We’re doing our own duck prosciutto, duck salami, two kinds of rillettes. It’s really fun. But in terms of the wine itself, they’re managing that separately. I’m not excluded at all, and there are a couple of wines—a few obscure bottles from Georgia and Russia—that we want to include. I have been putting in my two-cents here and there.

How are you splitting your time between the two spots?
We have our junior sous chef who is at Vertical all the time, but I will be there two or three times a week—usually Sundays, Tuesdays, and probably Wednesdays. We’re going to start doing tasting menus when I’m there on Tuesdays, which will be a lot of fun. We just started doing the cassoulet dinners on Sundays. It’s a great crew here at Bistro LQ and they’ll be just fine the days I’m gone. In fact, they’re probably going to be happier when I’m not around! I’m just excited to be represented in the San Gabriel Valley again.

What do you love about the SGV?
I was talking with some friends recently and said, “If I want four duck legs, a leg of goat, and a pint of blood, here on Beverly Boulevard, I’m dead! Just dead! There’s nowhere I can find that. But back when I was at Bistro K I’d drive ten minutes and I’d find my goat, I’d find my duck leg, and I’d find my pint of blood. This past Sunday I was shopping in Temple City at the Rosemead market, and it’s just so fabulous. Why can’t we have that here in L.A.? All the finest chefs go to the Santa Monica Farmer’s Market, but I go to Temple City to do my shopping. Is that crazy, or what?

Yep, a little crazy. Speaking of: What’s the pint of blood for?
On the current menu we make a little blood flan out of pork blood and hare blood with dried chilis in it and we serve it with a game consommé, cockscomb, and the agnolotti of chestnut and porcini.

That’s at Bistro LQ, right?
Oh, no, no I wouldn’t serve that at Vertical—unless, of course, they asked me to do it…