Home Uncategorized Top Chef SUPER 10: What We Learned from Episodes 8 and 9 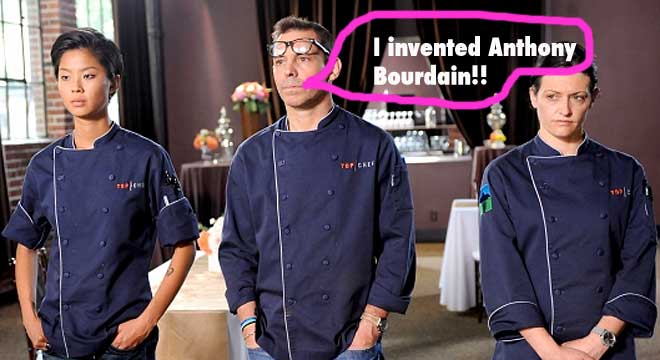 In honor of the 10th season of Bravo’s beloved cooking competition show—and the continual stream of L.A. restaurants spawned by its contestants—we shall, every week, outline the 10 (get it?) things we learned from watching each episode. Since we were on a blogging break last week (read: egg nog coma), here are the top 10 learnable moments from the last two episodes.

10. Josie must be the worst ever

Why else would the show dedicate two entire story lines to her being crazy annoying? Even the producers seem to have turned on her. Oh also, don’t bark up her tree, or something.

9. Hugh Acheson is a pun master

Roux the Day? Well done, sir! How do you feel about headline writing?

8. We’re not spending enough on knives

$500 an inch for a Bob Kramer knife? An inch?! Unless our blade happens to turn diced celery into plutonium, that’s not happening. [Editor’s note: Bob Kramer, should you for any reason wish to send a knife for “editorial consideration,” we’re at 5900 Wilshire Blvd., 10th floor, Los Angles, CA 90036.]

…and he’s Moses. Or so he claims in episode 8’s Quickfire challenge, which he wins for a top-notch fried oyster. So, which commandment talks about proper ear gauge size again?

6. CJ’s burger is this season’s “most memorable moment.”

Ehhhh, that’s pushing it. But our hometown boy is killing it in Last Chance Kitchen, defeating Belgian Bart last week and taking on John “blame the cookware” Tesar in this week’s episode. (Watch below!)

Watching the gang reminisce about “favorite moments” from the past ten seasons, one thing became pretty clear: The cast of season 4 brought it. Spike, Antonia, Stephanie, Richard, Dale—and Jennifer getting all “c’mon bring it!” during that epic stew room fight? OK Chicago, you win.

4. Padma on skates was as amazing as we hoped

But Stefan should probably keep that whole, “I edited together all of the Padma scenes from season 9 for my own personal sexy time video” bit to himself. #restrainingorder

2. Joshua is more of a dog person

“It’s like breaking down a cat!” says the mustached chef while chopping a rabbit to bits. I think we’ll skip the fajitas at your new Dallas restaurant, dude.

Yep, without John, Tony would be a nobody—a nobody, you hear?! At least, according to John, who revealed that he was the character Jimmy Sears in Bourdain’s breakout book, Kitchen Confidential. During last night’s episode, the “old man” explains that he was responsible for getting Bourdain his first job, and introduced him to dreamboat esteemed French chef Eric Ripert. Tony, care to respond?