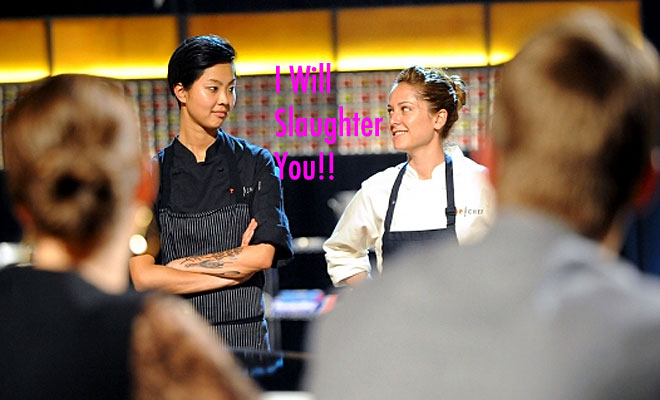 10. That was the most boring wedding ever

Chiavari chairs, 10-tops, forced reunions, waiting hours for food, drunk people breaking stuff, some kid passed out at the table—yep, we know a wedding when we see one. But from what we heard (thanks Grubstreet!), the “reception” lasted a whopping 11 hours. Hey, that’s longer than most Hollywood marriages! (Badum bum…)

Way to keep it in the family, team Brooke! CJ, Stefan, and Kuniko all helped our local finalist cook the 150-person meal. We may not have won, but we did show city pride. San Dimas High School Football Rules!

We almost didn’t recognize America’s most controversial contestant in that crowd shot without her trusty hair accessory (and/or sweat band). But who could mistake that burly clap we came to love so much in the roller derby episode.

7. Brooke and Kristen both joined biker gangs since the episode was shot

Did you see them both in the teaser for Watch What Happens Live? We haven’t seen that much black, leather, and tattoos on Bravo since—well, whatever the previous show was. Andy Cohen should be afraid.

Hey, nice to meet you. Now, who are you again? Literally, no recollection.

Did you catch that dis? Ilan said that all he remembers about the show was that he “looked fat and oily.” Padma’s response: “So, nothing’s changed.” Rawr!

4. Collards are the new kale

Thanks for the heads up, Hugh.

Our first clue that Kristen was the winner? The fact that the episode had five minutes left, yet there was hypothetically an entire dessert course yet to serve. So, yeah, we thinks Kristen is going to take this round for the win. But what ever happened to the olive oil and black sesame cakes the girls were whipping up as their final dishes? Tell us someone ate them. Tell us!! Cake wasters…

2. It really is Top Scallop

Fabio, you were wrong. Honestly, can someone please count how many scallop dishes have been served throughout the entire series? How are there any left?! We get that they cook quickly and taste great, but it’s got to stop.

1. Alton brown must be sick

Why else was he absent from this episode of Iron Chef?

Well, that’s it folks. We’ve learned a lot over the show’s last 17 episodes—mostly about Stefan’s preferred body parts, how the Broncos rule, and that Alaska’s super cold. We feel smarter already.