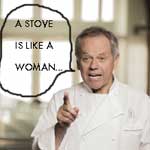 In honor of the 10th season of Bravo’s beloved cooking competition show—and the continual stream of L.A. restaurants spawned by its contestants—we shall, every week, outline the 10 (get it?) things we learn from watching each episode. Last night’s premier of Top Chef Seattle taught us plenty. Here, our top 10 learnable moments:

Wait, there have been ten seasons of Top Chef? Ten?! Jeeeeze…

#9: Only one exuberant mustache allowed per cast

Jorel and Joshua both rocked some serious lip hair, but in the end, only one was allowed through to Seattle. Which is odd because, like, it’s SEATTLE.

Well, at least he digs the cool, calm, and collected kitchen manner of our own Micah “never a sous chef” Fields, the executive chef at L.A.’s Standard hotels. Way to represent the L.A. attitude, Micah.

We kinda knew this, but last night, the show’s newest judge really sealed the deal with a parade of  priceless soundbites like “I like it soft in the middle,” and, “I had omelettes coming out of my ears.”

…by which we mean he says things that one could interpret as offensive, but somehow you forgive him because, you know, it’s Wolfgang. Exhibit A) “A stove is like a woman: it never behaves like you want it to.” Huh. Exhibit B) He compares an omelette to “a woman with no make-up on.” Oh Wolfy…

Fried kale made an appearance in two of the dishes this episode. We expect more.

#4: Hot Gazpacho is a great name for an improv jazz group, but a bad dish

Samuel L. Jackson was the first to decry the idea of “Hot-zpacho” in his famed Siri commercial. And here, again, the idea of a warm gazpacho is decried by Jeffrey who, in Emeril’s soup challenge, was barely able to chill his version. Isn’t hot gazpacho essentially just tomato soup? What’s the big deal? Haters…

Sure, we dig the cheery disposition and cooking chops of local gal Kunigo—chef at David Myers’s upcoming Century City restaurant, Hikoki & the Bird. But it was her subtle eye-roll at eager-beaver contestant Tyler that had us falling hard for the Tokyo transplant. She’s got spunk, this one. Go Yagi!

#2: This season is going to get weird

#1: Did we mention Padma on skates?