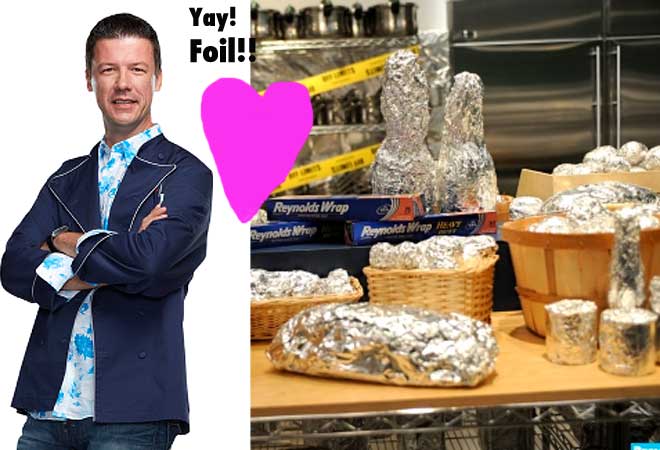 10. No woman should be forced to stand next to Padma Lakshmi

Honestly, it’s just not fair. We think Stephanie Izard is adorable, but posting up beside Miss Thing for a Quickfire challenge does no girl any favors.

9. Apparently foil is a product that needs advertising

This week’s Quickfire challenge was sponsored by Reynolds Wrap tinfoil. Is that really a product that needs pushing? It’s foil. You need it for stuff, marketing campaign or not. It’s like product placement for toilet paper. Yeah, dude, don’t worry—we’re gonna use it.

Yeah, and in case tinfoil ever does need a little PR push, just call up this guy! Bart was having a little too much fun with the foil challenge. A strainer? A hat? And we thought Belgians only got this happy about mayonnaise.

7. John may not know where his eyes are

That could be the only possible explanation for how often that guy has his glasses perched on his forehead. Three inches down, man.

Where the heck is that guy? Wasn’t Puck supposed to be one of the new judges this season? Other than his mentorship role in episode 1, we haven’t heard a single W pronounced like a V the entire season. We demand an explanation!

5. Micah needs to cool it

“I don’t know how I come up with this stuff. It’s almost like a gift—I can’t describe it.” Whooookay Mr. Lovethyself. Let’s put that to bed, shall we? “Berries are sweet and tangy!” No.

And still in the competition! He’s killed it in the last two Last Chance Kitchen episodes. Will our local gastropub giant (no, really, he’s a giant) win in this week’s sandwich showdown? Watch below to find out…

By which we mean if you eliminated the bottom five—John, Bart, Danyele, Josie, Micah—from this week’s final showdown, you’d wind up with the season’s five best remaining: Kristen, Stefan, Joshua, Sheldon, Brooke. And maybe a better show.

2. Wearing eyeliner only UNDER your eyes is a thing

Actually no, no it isn’t. Would somebody tell Danyele?

Well, next week. The teaser for next week’s episode showed the hostess speeding around the roller rink—a clip that got our attention in the season teaser after episode.

Note: Next week’s recap will be coming a little late due to the break. Expect a 2-for-1 recap by Thursday, January 3.