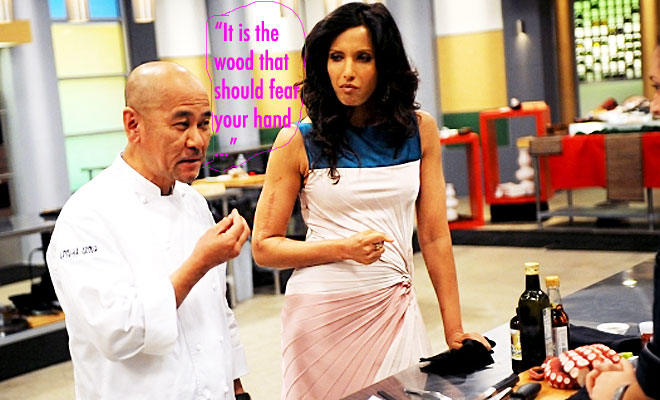 10. Josie is not completely delusional
The publicly disliked contestant actually kind of gets it. Reacting to the stress of all the hatred, the naked-sushi fan cries real human tears before the Quickfire Challenge. Atta girl.

9. Lemon charcoal is a thing
Sheldon impressed the karate-pants off of Quickfire judge and L.A. sushi legend Katsuya Uechi with his burned lemon trick. Us, too.

8. And Quoting Arsenio Hall is still a thing
Ohhhhh Josh.

7. They don’t have fried chicken in Austria
Oh WAIT, they totally DO! Stefan, maybe you should note the Austrian culinary superhero at that big table in front of you before you start making shit up.

6. Josh doesn’t get sushi
A bacon-egg-and rice sandwich isn’t sushi, dude. And your whole “I don’t do sushi!” act is downright disrespectful. Slice some fish and get over it.

5. Padma seriously HATES Stefan
Unless “bull-shitter” is a new term of endearment.

4. Brooke is a poor judge of character
…and talent. You didn’t hire Jon Shook and Vinny Dotolo to work the line at your restaurant back in the day, huh? As in, the Food & Wine Best New Chefs 2009, and our own 2012 Chefs of the Year? The guys who opened Animal and Son of A Gun, launched L.A.’s current southern food craze, and defined nose-to-tail cooking for the West Coast? As in, those two guys right there who are about to judge your weird chicken-breast paillard? That’s cool and not awkward at all.

3. We want Katsuya Uechi to be our samurai master
We’d thrust our hand into a wall for this guy all day long, Kill Bill style. It’s good to see that the influx of all that SBE money and weird geisha art hasn’t made L.A.’s spicy-tuna-crispy-rice king any less of a warrior. Who wants sushi?

2. Angelenos love breasts
“There’s plastic surgery everywhere,” quips Wolfgang (who was in rare form last night), trying to explain why both L.A. chefs used only deboned chicken breasts. Thanks for the help with the stereotype, “Wolfgang Cluck” (good one, Tom!). Chefs, you’re doubly guilty—please don’t fuel the rumors that L.A. is full of fat-fearing white-meat supremacists. We’re more of a leg and thigh crew, anyway.

1. Ding-dong the witch is dead!
Which old witch? Um, that one there, in the headband. Or as the judges phrase it, “The Josie Show has been cancelled.” …Except it’s actually still on at bravotv.com, where Josie faces Kristen in this week’s Last Chance Kitchen. Kristen, [said in Mortal Combat voice] FINISH HER.