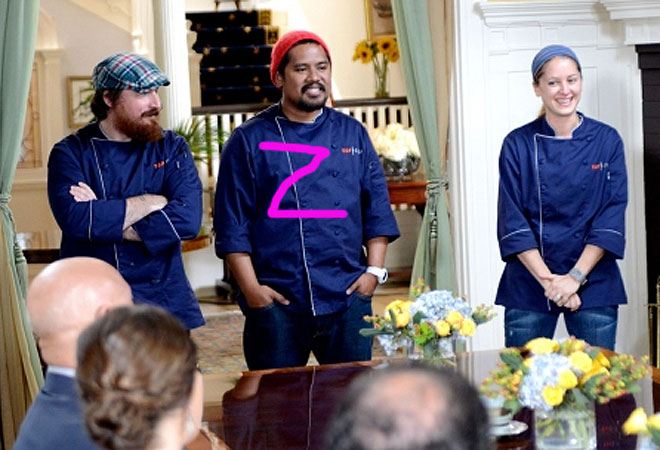 Sheldon’s on Team Zissou, Roy Choi gets real, and eight other things we learned from last night’s Top Chef.

Wow. So, boats and helicopters? We actually felt bad for the girl as she teared-up while soaring over the Alaskan wilderness. It’s OK, that’s how we get around bees—but with more screaming.

Is there a competition for being the most Hawaiian guy ever??? He’s winning.

We’re not sure that much realness has ever happened on Top Chef—and it’s a reality show. His deadpan explanation of rice spirituality? Legit lip trembling while telling Emeril that he changed his life? Roy, will you be our Valentine? Because you’ve got heart.

7. And now we know why Josh always wore the bacon shirt

It was the source of his power! After all, this was the first episode where the “Bacon Makes Everything Better” T-shirt failed to make an appearance—and look what happened…

6. Sheldon Is Part of Team Zissou

Ahoy! Now, what’s with the beanie?

5. Josh is off to a great start on the whole “Fatherhood” thing

How do you explain to your child that you missed their birth to make lousy scrambled eggs? Oof. His wife is more forgiving than we’d be. Must be the mustache.

No, honestly, we didn’t know that.

3. Foie gras is still legal in other states

We almost forgot, it’s been so long. [*Wipes away tear.] Too bad Josh doesn’t know how to cook it. What a waste.

Yeah, OK, sure—but why was that a thing? Oh, right. Money.

At Craft! (Surprise.) Has anyone spotted Ms. Lakshmi around town lately? Where’d the contestants shop? How long were they here? Where did they eat? Squeee!!!

…Next week, the beginning of the end.