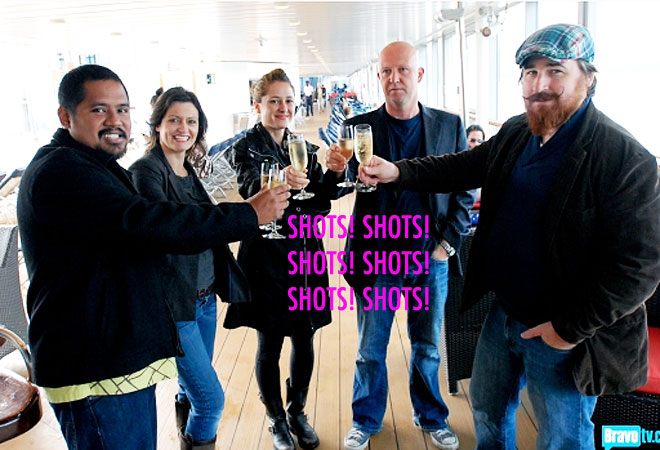 As The Braiser reported this week, the current Save A Chef frontrunner said some not-so-nice things about Stefan while recording a segment for the podcast Food Is The New Rock—namely, that he was often “wasted” and called ladies the C-word a lot. After last night’s episode, it seems Big-Ceej could be right about the first part, at least. Stefan and the rest of his cruise mates were hitting the bottle pretty hard. (See exhibit A, B, C, and D below.)  We know it’s a cruise, but it’s Top Chef, not Spring Break, guys.

9. Curtis Stone wears the sh*t out of a man-cardigan

8. Brooke is afraid of boats

So was the weather—perty LOUSY! Grey skies and bundled-up diners do not lure me to America’s last frontier. Baby polar bears do, though.

6. And the winner for most annoying restaurant name ever is…

That whole demure South African thing vanishes the second you put a large blade and a piglet corpse in that girl’s hands. Yeesh!

4. Josie’s gone for good—like, for real this time

Kristen beat the pants off her on last week’s Last Chance Kitchen, and CJ prevailed in the public Save A Chef vote (no surprise). Free at last, free at last…

3. Iceberg puns on a boat never get old

He loves manicures! This guy’s just adorable, isn’t he? Too bad he can’t cook tempura to save his life.

1. Stefan had a pants party

But it got busted.

Watch a bunch of drunk people talk about food here: