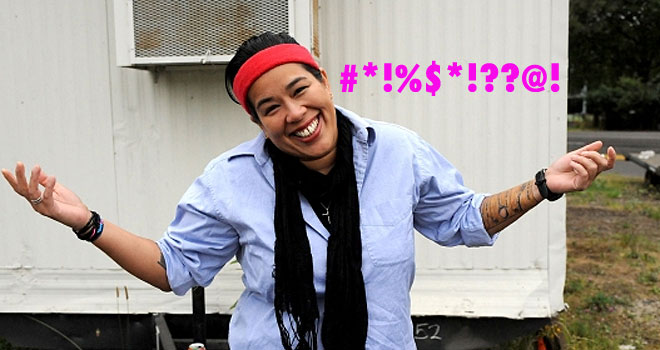 10. Liquoring up your diners is a double-edged sword

Stefan found this out the hard way: Sure, poppin’ endless bottles puts customers in a lively (and forgiving) mood—but then they never want to leave. As someone probably said onetime—or not: “He who bringeth the party must keepeth the party going.” Take heed.

9. They don’t have Filipino food in Oklahoma

Oh Josh, your dedication to pro-bacon fashion will not help you when it comes to understanding the subtleties of balut. It will, however, have us wondering if you own any other T-shirts.

It was a big night for the lowly dishwasher. First, Sheldon puts a dish-doer on parsley-picking duty and admits that he, himself, began his culinary career in front of the sink. Kristen also seems to be on team scrubber, espousing that she’d rather have a dishwasher on her team than Josie. Then again…

7. Always judge a restaurant by its font

Is that the key to Danny Meyers’ success? Graphic design? From the small o in URBANo to the little tree on Kristen’s menu, Meyer read a lot into the two restaurants’  logos. The food here must be dynamite!

6. This is probably going to be a good episode of Last Chance Kitchen

If there’s anyone who can throw CJ from his enormous six-win throne, it’s Kristen. Has BigCeej finally met his match? Will Kristen’s classic French style beat out CJ’s all-American pub grub? Do repeated rhetorical questions intrigue you? Then watch the full episode below!

5. Stefan is sort of an A-hole

OK, we knew this already—in fact, it was the entire premise of season 5—but wow. Us: Hey Stefan, what band did you say you were seeing tonight? Stefan: Oh, you wouldn’t know them. Dick.

4. The Animal guys are going to make a cameo

We spotted Vinny Dotolo (and his beard) in the “next time on” segment, and we can only assume his best buddy Jon is there alongside him. L.A. represent!

3. Colored napkins are a no-no

Thanks for the lesson in classy tablesapes, Brooke. So, then should we return these?

2. Josie’s headband is made of magic

Perhaps she acquired it in exchange for selling her soul Satan? Or traded some sort of magic beans to her old football coach? There is no other way that this girl has yet again been spared by the panel. It’s just not possible—unless…

That’s the only way we can see it. We should all pray for some sort of miracle next week, regardless.