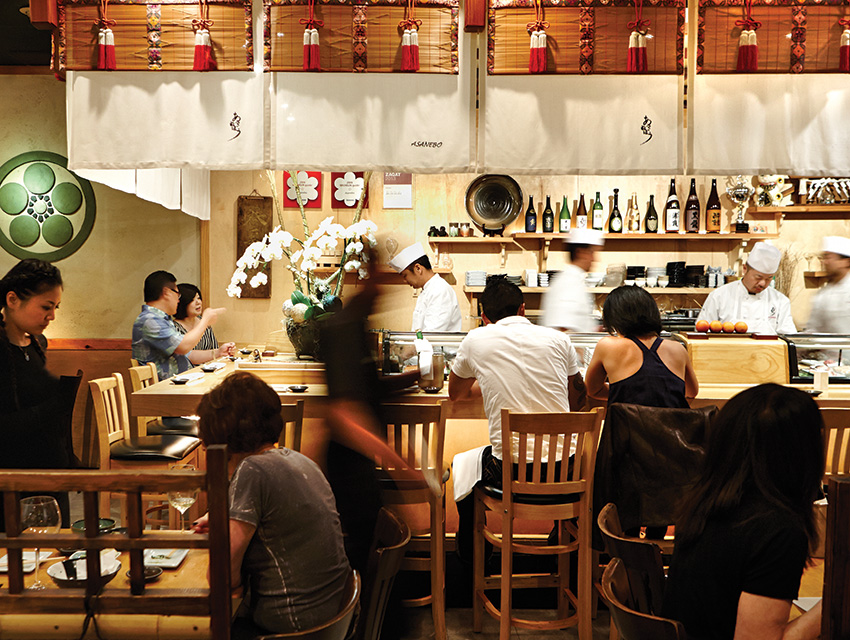 The latest arrival in a wave of top sushi chefs setting up shop downtown is Hiroyuki Naruke, a 30-plus-year veteran recruited by three L.A. lawyers who frequented his six-seat sushi bar in Tokyo’s Roppongi District. Q’s omakase-only policy means your meal will run at least $165 per person (roughly the same price Naruke charged diners in Japan), but the reward is an experience that seems to have lost nothing in its trans-Pacific translation. Seared toro comes dabbed with fermented sansho pepper paste, and silvery slices of shad gain depth from red rice vinegar. Naruke’s ingredients and techniques should excite even the most seasoned sushi aficionado.

Try to buy your sushi chef a Sapporo here, and he’ll politely refuse. “Not while working,” he says. This sushi is serious business, and your senses know it—the spine straightens as you leave the commuter rush behind on National and enter the muted restaurant. But minding your p’s and q’s is a small price to pay for such quality (which costs you much more). Omakase—chef’s choice—is the rule, and while the succession of uni-smothered squid noodles, fan-shaped spreads of sashimi, and jewel-like nigiri reinvents no wheels, it never fails to set heads spinning.

A mundane elevator delivers you to the ten seats around a cypress counter, where you will feast on the most expensive meal in Los Angeles. Sure, you may quibble: For $395 a head they could at least give you the water. And some might say that, like Pico Boulevard’s sublime Shunji, it’s more kaiseki (a traditional multicourse meal) than sushi. But to object is to remain on a lesser plane. Hiroyuki “Hiro” Urasawa’s handiwork will have you considering the way charcoal embers under a hairy crab shell roast the custardy tomalley, a delicacy made up of the fat and innards. It all culminates in a magnificent sushi procession. One moment the chef is molding the softer-than-soft toro with a grin on his face, as if he’s Ray Charles playing “Georgia”; the next he’s commanding you to consume each item within ten seconds. The bill settled, you walk out as two waitresses bow by the curtain. Accept it. You deserve it.

You know this Westside strip mall place is halfway between William Morris Endeavor and the Palisades because you can overhear agents in Armani suits and talent in Cape Cod duds plotting blockbuster campaigns. The staff is friendly and welcoming, but it’s Wonny Lee and Yoya Takahashi’s flawless execution of inventive rolls that has made Hamasaku’s name. Generous without being extravagant, the house style is predicated on tempering the grand with the modest. In the G6 roll it’s the pale beauty of soy paper that counters the trifecta of albacore, tuna, and spicy aioli. The Admissions roll ratchets up the ingredient count, splicing fiery mayo, whitefish tempura, avocado, and crab in cross-cut cylinders, with a thoughtful drizzle of eel sauce to keep it all on track.

West Hollywood’s most fashionable fish lovers converge at the outpost of fourth-generation sushi chef Hirotaka “Taka” Fujita. They come for dishes like yellowtail carpaccio with jalapeño—a vestige from Fujita’s days at Nobu. The famed omakase can begin with a trio of Kumamoto oysters—one with tangy oroshi ponzu, another with an invigorating red chili sauce, and the last with luscious uni to complement the bivalve’s silkiness. The subsequent parade of nigiri is paced to keep your taste buds engaged: crunchy geoduck finished with Hawaiian sea salt and a splash of citrus, kinmedai brushed with velvety nikiri shoyu, and a crimson slab of toro that melts like whipped butter.

The corrugated metal sign hints at the space’s former life as a Mr. Cecil’s rib joint. But inside, behind the eight-seat sushi bar, is Shunji Nakao, who once wielded knives at Valley favorite Asanebo. He’s preparing elaborate omakase-style meals (there’s an à la carte menu as well), with a sharp focus on vegetables. Orbs of purple potato and blue cheese, monkfish liver, and marinated tomato parade down the plate. Braised octopus is part of a trio, along with yellowtail slivers and raw squid in a seaworthy sludge of squid ink and urchin. At about $80 a head, this is a warranted indulgence.

Asserting itself on a stretch of Ventura  previously dominated by Sushi Nozawa (shuttered) and Katsu-ya (drifting), this Valley veteran seems to have been reborn. The wood-bedecked cubbyhole does two things very well: It offers topmost grades of seafood in a simpatico atmosphere, and it transforms cooked preparations as rigorously as it does raw ones (which can be far from the case elsewhere). Executives in shirtsleeves offer a frosted beer to an aproned chef. Everybody’s laughing until the oohs and aahs begin upon the arrival of flash-seared toro with garlic flakes still warm from the pan.

The undisputed favorite in the heart of Torrance’s vibrant Japanese community is this five-year-old sushi slinger that wants for ambience but doles out heaps of hospitality. The floral aroma of supple pink sea bream will linger on your palate, while a plump sardine, accented with grated ginger and minced scallions, dissolves with ease. Santa Barbara uni—stored in saltwater to retain that magical fresh-out-of-the-shell sweetness—dazzles in Nozomi’s signature unidon rice bowl.

Let’s face it, superior sushi will never be a democratic experience, but this downtown depot is as close as it’s ever going to get. Arrive early (and that means by 11:15 a.m.), and already each inch of the counter is packed with fressers who consider this Little Tokyo stronghold the ultimate destination. (The tables fill up just as quickly with those who know about the $15 combo.) Flirting with bargain prices, Sushi Gen maintains sensational quality: Salmon drapes warm rice, tapering into a point as if the fish were still fighting a strong current; snapper sashimi cascades over a plate like translucent petals. It’s 11:10 a.m. No wonder there’s a line at the door.

With only a handful of tables and 12 bar seats occupying the upstairs corner of a strip mall, Sushi Park is a no-nonsense respite from the cacophonous Sunset Strip. Chef-owner Peter Park scours the markets for high-quality seafood that’s at once delicate and rich. He tailors the seasoning of each bite-size portion of rice to its accompanying protein. Though his team is fiercely focused on the food—slicing with precision, explaining which pieces warrant which sauce, if any—it manages to be gracious. Park’s may be a modest place, but it makes a show of what matters most.

Generic in a food-court kind of way, the name alone acts as a shield, concealing the 18-year-old restaurant from the radar of casual passersby who stroll between the Urth Caffé and cupcake shops on South Beverly Drive. The unassuming sanctum has finesse to spare behind the bar. The quality catches you off-guard—kohada is cured and scored expertly. Mackerel, otoro, snapper, local uni: Each slice is more marvelous than the last. But perhaps most marvelous of all is the Zen-like room’s relaxed, contented mood. With one bite you’ll share the spirit.

As an older woman jabbers on about her parking ticket, Ken Namba nods patiently in agreement. Time may be short, but Namba’s home is her home and your home—and home to that mother with two tots on the tatami mats in back. The chummy feel belies the sushi, made by a true craftsman who has been plying fish and rice in L.A. since the ’70s. Few other knife wielders come close. Almost everything here is cut from whole fish that Namba hand selects at the market. Shrimp are beheaded before you, their plump tails still flapping on your plate. A wedge of lime brings out the sweetness in Santa Barbara uni, plucked from and usually served in its spiny shell. All this, and you can even get a California roll.

Morihiro “Mori” Onodera, known for handcrafting everything from his custom-grown rice to his ceramic ware, is no longer at his namesake restaurant (he sold it in 2011). But his meticulousness seems to have been inherited by Masanori Nagano. This is a temple for purists who appreciate intricacy. Sea bream is cured overnight in kombu, or kelp, to intensify its umami flavors. Baby barracuda, given a gentle sear, turns an amber hue as it fills the room with smoky perfume. Both are laid over flawless shari, a unique house blend of sushi rice with a glossy finish that, like the fish, feels firm and clean on the palate.

The unlit sign shouldn’t deter you, nor should the sight of convenience-store coolers when you enter the all-orange room. Ordering from Tsuyoshi Kawano can feel like a test; you half suspect the counter stools are spring-loaded and he need only pull a lever to land you on the street if you ask for “something spicy.” But persevere. In this unlikely setting you can experience adventurous dining, where truffle oil (yes, really) frames the smokiness of flame-browned wagyu sushi and a few shards of gold leaf summon all the briny power of broiled Santa Barbara prawns. Make it to the end of the evening and you can watch Kawano (“Go-san” to regulars) prepare for tomorrow, dousing sheets of dry kelp with sake as he layers them between thick fillets of opalescent halibut.

Shigeru “Shige” kudo is known as a Grumpy Gus who will throw you out for even a sideways glance at your phone. But then there are those framed photos of him cozying up to Flea and Vincent Gallo that tell you he might be bluffing. The neighborhood is as rough as his reputation; he opened on a gritty stretch near Westlake to avoid the tourists. So regulars—a smattering at a time—pay their respects, bowing to the 62-year-old master like students in a beginner’s karate class. In exchange they get treated to a traditional array of sushi (No California Rolls! declares a sign) made according to Kudo’s impeccable standards, which are seldom matched. An oenophile, he stocks a surprising cellar with old-world bottles.

Ryota Okumura is delighted when you don’t order a roll. He and his crew do some fine ones (the delicious twist on the California is a standout), but the 33-year-old chef didn’t study at the Hattori Academy in Japan and toil at Sushi Zo (see page 90) to oversee a Ventura Boulevard roll shop. The layout of his minimalist white-on-white storefront allows him to hand platters directly to parties sitting in snug booths while attending to customers packing the counter. Sardine slivers are a highlight; Okumura carefully picks out each and every bone. If you say the word kohada, you might even be asked to move up the counter to the lead station.

Sake to Me: Chill Out With Japan’s Traditional Drink

On a Roll: 5 Food Personalities Who Should Have Their Own Sushi Roll