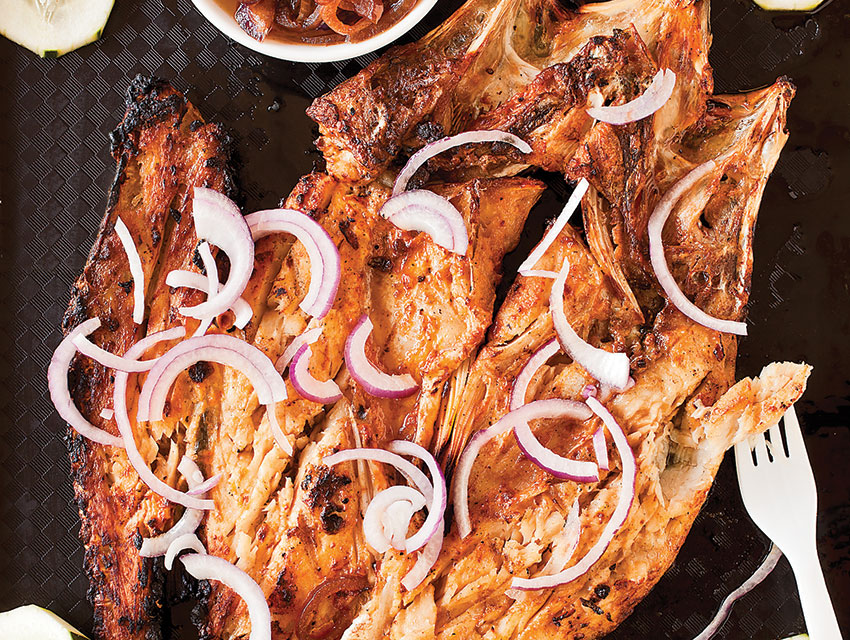 Mariscos Chente
3544 W. Imperial Hwy., Inglewood, 310-672-2339
Sprawled along the Pacific, the Mexican state of Nayarit is known for its pristine seafood. Lots of restaurants in L.A. produce a decent version, but none with the rigor and gusto of Mariscos Chente. A billboard overlooks the storefront, the restaurant’s name painted in an unsteady hand above the door. Walk into a room that’s wall-to-wall turquoise, and you’ll see chef Sergio Peñuelas in the cramped kitchen. (The Mariscos Chente down the street belongs to Peñuelas’s estranged brother-in-law.) He might be scoring and salting a silvery snook before he grills it whole on the flattop or serving camarones a la pimienta (spicy shrimp), which in his hands becomes a conflagration of aromatic oil and peppers. Turning from a pot of camarones al vapor, the heat illuminating his face, he’ll pry the snook from the grill at exactly the right instant. Crisp yet tender, the fish lights up in your mouth after it’s been drizzled with Nayarit-style salsa: pureed jalapeños in a suspension of water. His shrimp ceviche, mixed on the spot, is bright and briny; eating it, you almost forget you’re on Imperial Highway. When Peñuelas can source cucarachas, tiny plump Honduran shrimp, he blisters them in hot oil and adds lime wedges to the plate. They’re just the thing on a Sunday afternoon when an oompah-pah band plays on the crowded patio in back.

Teresitas
3826 E. 1st St., East L.A., 323-266-6045
The man in the mechanic’s shirt at the counter tucks into a stew of espinazo, or pork spine, a dish freighted with herbs and prickly pear nopales. In the Naugahyde banquette behind him, politicians from downtown pause their conversation to work on tortas stacked high with moist carnitas. When Teresa Campos de Hernandez started her East L.A. restaurant in 1983, she had a handful of recipes from her native Zacatecas. Being true to them was the extent of her business plan. There’s a stunning soulfulness to Hernandez’s food, especially dishes of the day like the pork ribs, which are bathed in a sauce infused with roasted chiles and chocolate. Don’t get there too late, though; they sell out.

La Huasteca
3150 E. Imperial Hwy., Ste. 100, Lynwood, 310-537-8800
Inside Plaza Mexico, the elaborate Spanish colonial mall in central Lynwood, topless Indians peer from the murals of La Huasteca. Rocio Camacho cooks in a multitude of styles, including dishes that pay lip service to indigenous Mexico. But stick to the classics. Camacho’s zucchini blossom empanadas—a creamy compression of the herbal in the thinnest of crisp skins—are hands down the best in L.A. The sauce of the mancha manteles (aka “tablecloth stainer”) is so subtly intricate, with layers of heat and spice building on each other, that it seems drawn from a civilization’s memory bank. Camacho even lends remarkable nuance to flan, that most Spanish of desserts, by perfuming it with chile ancho.

Birrieria Apatzingan
10040 Laurel Canyon Blvd., Pacoima, 818-890-6265
The broth of the birria, or goat stew, glistens in a bowl. The spoon-soft meat arrives in warm tortillas, a hint of gaminess peeking through the onions that imbue each bite. A squeeze of lime adds the necessary acidity to the soup’s gossamer layer of fat. Order it with a cool Sidral Mundet, an apple soda. You’re in the northern San Fernando Valley, savoring the food of Apatzingán, a city in the state of Michoacán. That man in the painting strangling the goat is Martin Cruz, the cook, who also offers straight corn tamales called uchepos. In the morning trucks packed with lawn mowers and rakes fill the lot outside as the city’s gardeners fuel themselves with apporeadillo—eggs scrambled with mortar-pounded salsa and strips of seared beef.

Lotería Grill Hollywood
6627 Hollywood Blvd., Hollywood, 323-465-2500
You’ve had black beans, rice, and tacos, but none where the beans taste this intense, the rice is accented with hierbabuena (a type of mint), and the tacos bear a comforting mix of squashes and corn kernels. Jimmy Shaw honors authenticity while updating Mexican food for a city in which the radio pulses with ranchera music and Ralphs carries Virgen de Guadalupe candles. Shaw started in the Farmers Market, then expanded into a space with high ceilings and minimalist flair on Hollywood Boulevard. A duplicate in Studio City would follow. To him speed is as important as flavor; the chicharrón de queso, big sheets of crisped cheese, arrive within minutes. Tacos with mushrooms in an earthy huitlacoche sauce have a meaty depth; the ones with stewed pork rinds in chile verde have a primal power.

La Casita Mexicana
4030 E. Gage Ave., Bell, 323-773-1898
The baritone of the great Vicente Fernández lends stateliness to an art-filled dining room swathed in warm orange. But nothing prepares you for the restraint of the food. The tortillas of the enchilada de queso are dragged through a sharp red sauce, cotija cheese is sprinkled inside, and the whole is folded like a crepe. Delicate and light with a brilliant austerity, such cooking has turned Ramiro Arvizu and Jaime Martin del Campo into stars on Univision. With the chile en nogada—the pair makes a definitive version of the Puebla specialty—the key is the charred poblano pepper offset by sweet, creamy pecan sauce. Breakfast chilaquiles, a nest of chips in a smoky chipotle broth accompanied by eggs, is particularly good.

La Taquiza
3009 S. Figueroa St., south L.A., 213-741-9795
Hard by USC’s frat houses, the Figue-roa Street hangout attracts a mishmash of pistol-packing cops, ID-wielding office workers, and everything-but-the-bong students for lunch. A spit of marinated, sputtering carne al pastor has an almost totemic effect on the line of customers. The meat is carved to order, peeling off in chunks that hit the counterman’s grill. He slings them into mulitas (a kind of supercharged quesadilla), folds them into bulging burritos, and layers them over crisp nachos that glimmer with salsa and guac.

Yuca’s
2056 Hillhurst Ave., Los Feliz, 323-662-1214
For a hut with a vinyl awning and plastic garden chairs in the parking lot, Yuca’s exerts an irresistible pull. Generations have grown up eating at Socorro and Dora Herrera’s Los Feliz institution. Some can’t drive along Hillhurst without grabbing a juicy carne asada burrito. Some are drawn by the cochinita pibil sandwiches, the pork slow-cooked in a banana leaf, laced with achiote, and piled onto a sourdough roll dabbed with mayo. Others answer the call of the vaporcitos, thin Yucatecan tamales served on Saturdays. But lots of us come to enjoy Socorro, big armed, bighearted, ensconced at her post for 34 years.

Tacos Ensenada Seafood
2171 E. Huntington Dr., Duarte, 626-359-4959
The tiny Duarte restaurant is essentially a Baja taco stand backed against the San Gabriel Mountains. There are soups crammed with fish and diced vegetables and tall, chilled tumblers of cóctel de camarones, or shrimp cocktail. But good as they are, the reason you slogged up the 210 to get here is for the fish taco. The crackling batter that envelops the fish is cooled by a tangy crema and buoyed by a cabbage slaw—hand cut, not shredded. The seamless interplay of contrasts—one that so many places botch with mushy batter or rubbery fish—represents the fish taco in its purest form.

Guelaguetza
3014 W. Olympic Blvd., koreatown, 213-427-0608
There are two other Guelaguetzas, but neither can match the one on Olympic Boulevard. An authentic Oaxacan restaurant located in a former Korean banquet hall makes for a happy jumble. The clayudas, giant tortillas, are irresistible when spread with asiento, a traditional condiment that could pass for whipped lardo. Moles are a specialty. Thick with pounded almonds, olives, and roasted chiles, the almendrado is a tapestry of interwoven elements. Most evenings there is live music, but on Thursdays classic Mexican films are shown. Seeing abuelas and Korean hipsters laugh at the comedian Cantinflas’s pratfalls is to understand Guelaguetza. It’s perfectly L.A.

This Unsung Dish at a Pacoima Birrieria Is a Taste of Michoacán in L.A.