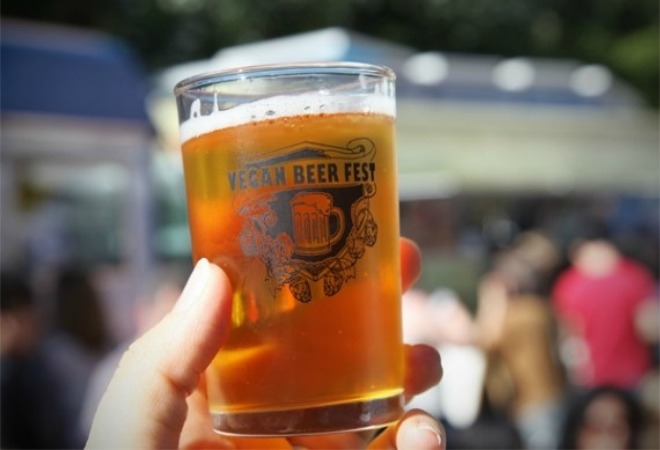 The Vegan Beer Fest started out as a tiny little thing, drawing just a few hundred people the first time it was held, four years ago. This year, on May 4, the Vegan Beer Fest returns, along with its three hosts (Quarry Girl, Tony’s Darts Away and The Roxy), only now it’s going to be held across the street from The Roxy right on the Sunset Strip. We recently spoke with Tony Yanow of Tony’s Darts Away to get the latest on this growing event.

Why did you start Vegan Beer Festival?
Quarry girl and I had become friends over time … she wrote a bunch of pieces about my restaurants. She’s really helped me shape my business and learn how to appeal to the vegan community in L.A.. Meanwhile, Nic Adler (The Roxy) and I have been friends for a number of years. Nic knew Quarry Girl’s work and was a fan. Quarry Girl knew Nic’s work and was a fan. The three of us got together and it snowballed from there. We all wanted to raise money for local charities that help make L.A. a great place to live.  We all recognized that there was a need for something like this, a celebration of beer and vegan food and a party for vegans, vegetarians and anyone else who wants to hang out with us.

What did you hope to achieve that first year?
We really just wanted to do something nice for the community and throw a party with some great cruelty-free beer and food. And, I think we did that quite nicely. We were able to save some dogs from horrible living conditions, some brewers got to showcase their delicious beers, and some chefs got to share their creations with fans and gain new ones.

To what do you attribute the growth (in attendance) of the event?
It’s a great event. The beer and food are really fantastic.The bands are great.  It’s a place where people with similar ideals can meet one another.  Also, you don’t have to be vegan or vegetarian to enjoy it.  I’d say half of the revelers are just there for the party and the cool vibe. It’s fun, laid back, it’s unlike other festivals that can turn into drunk-fests. Also, it’s easy to get to, especially this year.

What has been the response from breweries that have been involved or that you have reached out to for involvement?
As a brewery owner, I know the power of personal interaction with existing customers and potential new customers. I also know that connecting with people on common ground about something they are passionate about can make lifelong connections, and that is why so many breweries want to be a part of it.

Ok, a more personal question: What’s your favorite vegan dish/beer pairing?
At risk of sounding like a terrible homer, I love red, hot and greens from chef Randy at Tony’s Darts Away paired with Point the Way IPA.  The crisp hoppiness cuts some of the Indian spices and makes for a great combination. If I’m cooking at home I like to make grilled artichokes with lemon veganaise dipping sauce and pair it with Orval. There’s a delicate flavor and texture balance between the zesty lemon and the sweet Belgian yeast and between the hearty weight of the artichoke meat and the light effervescence of the beer that I really enjoy.