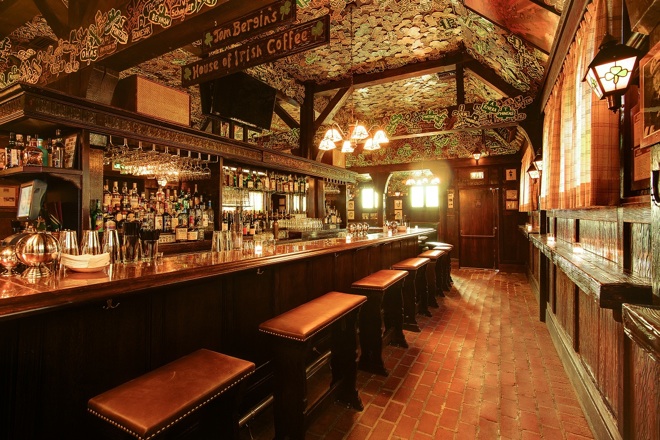 “[This has been] one of the hardest decisions I’ve had to make. The Instagram post which sparked this was posted without my approval, and happened after a staff meeting. As of now, due to financial hardship and out of respect for our staff, I’ve decided to make this week our last week of regular service. Our staff will be paid a severance, and we’re actively finding placements for them at other venues. In order to keep Bergin’s alive as long as possible, the bar will remain open Thursday to Saturday from 5 p.m. to midnight with myself and my GM and bar manager working it by ourselves. Vestry will remain open to our members via reservation as always, and we are open for private events and filming. This will hopefully keep us viable so that we can have one last St. Patrick’s Day bash.”

Strike up a chorus of “Danny Boy.” It appears the fate of one of L.A.’s most historic drinking spaces is once again in jeopardy. In a note posted on Instagram this morning, Tom Bergin’s current owner Derek Schreck announced that due to “harsh realities of the demands of both our little Irish cottage here, and also the marketplace at large,” the beloved pub and its upstairs whiskey lounge, The Vestry, will close for business on Sunday, January 21. Schreck added that the decision “has proved itself almost impossible to reach, and the culmination of deliberation and grief.”

Unfortunately, fans of the 82-year-old tavern on Fairfax are all too familiar with Tom Bergin’s beleaguered saga. In 2013, the bar briefly closed after its previous ownership—chef Brandon Boudet and restaurateur Warner Ebbink—decided to shutter the business following a costly renovation and flagging sales. That same year, Schreck—a bar regular and ardent preservationist—stepped in as owner, pledging to preserve the historic décor and the 6,000 or so inscribed cardboard shamrocks that lined the ceilings. It appeared that Tom Bergin’s had finally been saved. True to his word, Schreck maintained the moody ambiance of the horseshoe-shaped bar, pouring pints of Guinness and cream-topped Irish coffees (the pub’s signature drink) amid the worn oak furniture, polished brass rails, and stained glass windows that lined the room.

Nearly five years later, Tom Bergin’s finds itself in similarly dire predicament. If an earnestly committed owner was unable to keep the tavern’s traditions alive, can anyone? Until that question can be answered, you’ll find us raising one last pint at the bar, the same one that has been a St. Patrick’s Day destination for drinkers since 1936.