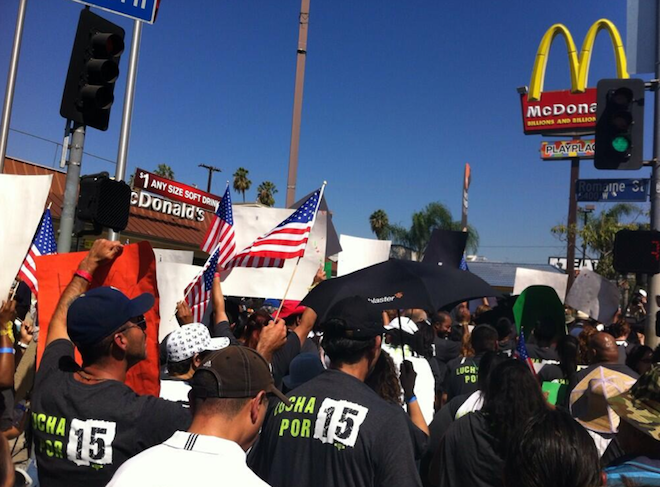 It’s a news story that has captured the nation just days before Labor Day weekend: in 50 states across the country, employees of McDonald’s, Wendy’s, Taco Bell, Burger King and other chains have dropped their French fry baskets and paper hats to go on strike in an effort to obtain higher wages. Most fast food employees earn minimum wage (nationally $7.25 an hour; $8 an hour in California) or slightly more. They’re fighting today both to organize into unions and for a wage of $15 an hour.

When fast food restaurants began blanketing the country in the 1950s, minimum wage was acceptable for their entry-level employees. These workers were often high school kids looking to make some pocket money. Today, however, up to 46% of fast food restaurant employees are supporting families and 88% are over the age of 20; more than half are over 35. Today, they’re demanding a living wage, or at least one that will allow them to meet the growing costs of living in an urban center. According to MIT’s living wage calculator, a resident in L.A. county with one child should earn $23.53 per hour.

It’s easy to antagonize fast food corporations. McDonald’s alone made over $5 billion last year. But the big employer is showing no signs of backing down. Ofelia Casillas, the company’s media relations manager, told the San Diego Union-Tribune that McDonald’s “respect[s] our employees’ rights to voice their opinions. Employees who participate in these activities and return to work are welcomed back and scheduled to work their regular shifts as usual.”

Using Twitter and national media outlets—even Stephen Colbert chimed in, saying, “But why should corporation[s] have to pay these people more than minimum wage? Isn’t it up to these people to pull themselves up by their own fry baskets?”—to get their message across, fast food workers and those looking to organize into unions continue to strike across the city. Many fast food restaurants are closed today, or aren’t operating at their namesake pace. Follow #Fightfor15 or #829strike to keep up with the latest in the city and beyond.

To show your support, put down that Big Mac. Supporters of the strike are also joining rallies in New York and other cities and going so far as to leave complaints with specific fast food restaurants they may ordinarily frequent. The Service Employees International Union (SEIU) supports fast food workers’ right to organize. They’ve created an open letter to fast food corporations demanding higher wages for workers. To support the strike and their right to unionize, sign the letter here.