Home Uncategorized ‘Tis the Season: Cheer on the Chiles en Nogada this Fall 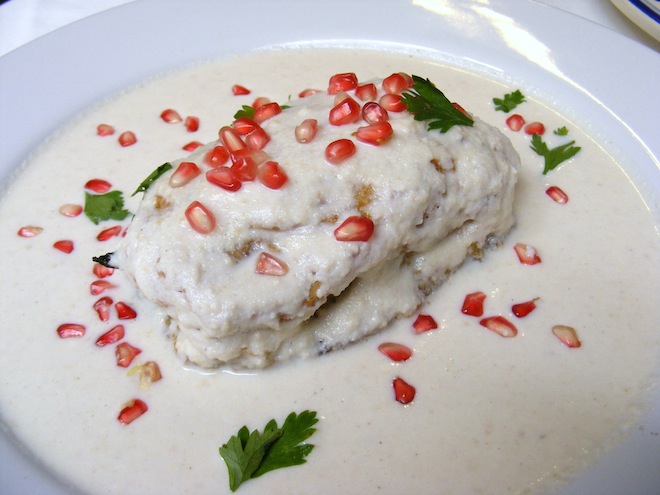 Yes, yes, the 2013 Major League Baseball season is less than a week away from the playoffs and the 2013-2014 NFL season is full swing. But what I’m worried about is getting a table for the last week of Chiles en Nogada season 2013!

Chiles en nogada is the most famous haute cuisine classic of Mexico. This regional chile relleno from the state of Puebla consists of a roasted and peeled chile poblano—you know, the one that Ralph’s and Von’s wrongly calls a pasilla—a filling of a sweet and savory picadillo of seasonal fruits and ground pork, a creamy, white walnut sauce, and happy tear-drops of pomegranate seeds.

The dish was created to honor Mexico’s first emperor, Agustín de Iturbide—the colors of the dish mimic those of the Mexican flag. But it’s the state of Puebla that puts up billboards advertising this regal chile relleno.

Here in L.A., several restaurants are celebrating chiles en nogada season. Traditionally, the seaons starts in late July and ends on September 30, but here it really goes until the last pomegranates and white walnuts are used up.

Chef Vicente del Rio, owner of Frida’s restaurants, plans on serving the dish until sometime in October, “we’ll do it as long as we can get the ingredients”, del Rio said. Frida’s makes the original recipe, without an egg-battered chile.

La Huasteca in Lynwood’s Plaza Mexico adheres to the seasonal tradition of chiles en nogada, and is currently offering the dish until Mother Nature says otherwise.

Of course, you can get the dish year round at La Casita Mexicana in Bell. At San Gabriel’s Babita, you might see some substitutions for the traditional ingredients, but the feel is still the same.

This is the World Cup, the Super Bowl, the World Series of stuffed chiles—you can even paint your face red, white, and green if you like—you know, for the team.