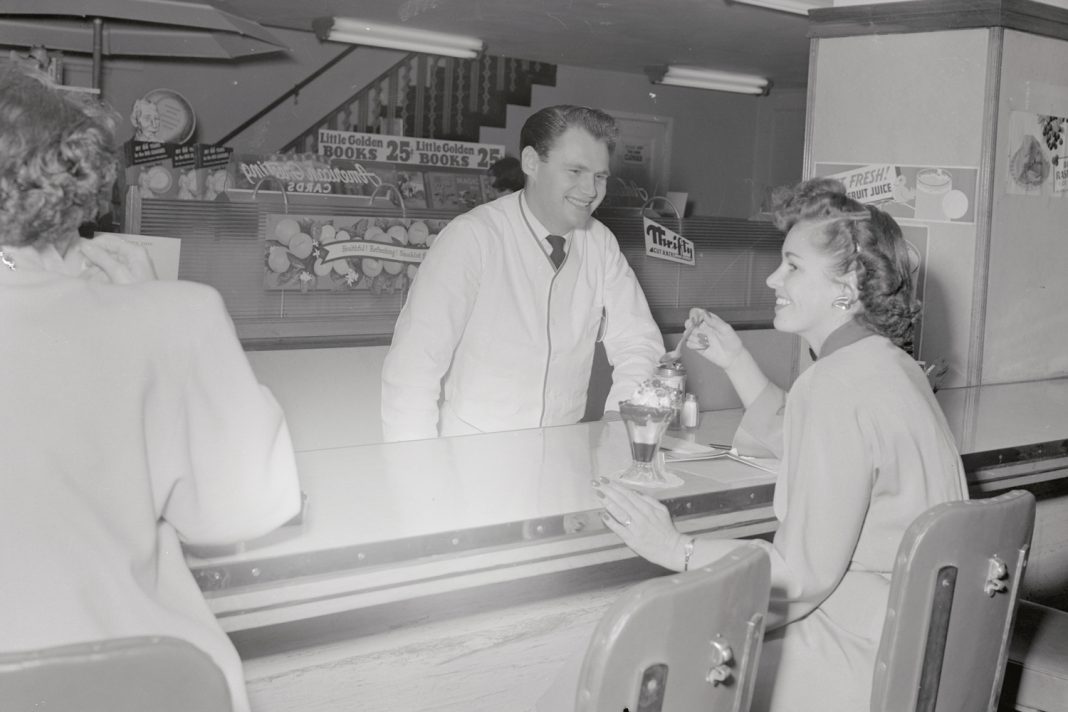 Dr. Raymond Borun is a retired physician in Brentwood. His father Harry and uncle Robert founded Thrifty Drug Stores in 1929, and the stores quickly became known for their delicious ice cream. In 1996, the chain was taken over by Rite Aid, which continues to serve Thrifty Ice Cream, which the company manufactures in El Monte.

Los Angeles magazine’s Ask Chris asked Dr. Borun about the origins of the sweet treat, and the 102-year-old gave us a history lesson on one the most famous L.A. companies of the 20th century.

RAYMOND BORUN: When my family immigrated to America they were extremely poor. My father and uncle started working while in grammar school and brought pennies to the family to help them survive. They ended up working for Brunswig Drug out of high school and after a few years wanted to open their own company. They opened Borun Brothers, a wholesale drug company, downtown on Los Angeles Street, around 1919.

How did they get into drug stores?

During the Great Depression, the corner drug stores that bought from them were going broke. There were fewer stores to sell to, so in order to survive they thought they would own the drug stores themselves. They knew how to get stuff at a low price because they were a wholesale company. So, they started this idea of Thrifty Cut-Rate Drug Stores. They would go to a building owner and say, “We’re not going to pay you any fixed rent, but we’ll give you a percent of our gross,” and because of the Depression the owners were willing to do things they wouldn’t have done in reasonable times. So, they’d get a vacant store in the middle of a block and put in very cheap fixtures and raw lumber tables. I mean, they wouldn’t even paint the damn things. They called those “pine board stores.” So, they paid no rent, they paid very low wages because there was no other work, and they had wholesale connections to get cheap items like combs and toothbrushes. Very low quality stuff that they sold at very, very low prices. People bought it because they couldn’t afford anything else. They were getting stuff directly from the manufacturers. They undercut the corner drug stores who couldn’t compete with them because of the way they were buying and that was sort of the beginning of this whole idea of chain stores. The whole idea is to drive out competition.

How did they become well known?

They would do full-page color newspaper ads, which was unheard of at the time. My uncle Norman Levin was the retail guy and he had all these ideas about how to drive up volume. That was the big deal, not to make a big profit on each item, but to deal in volume. That’s what their goal was. It was Norman Levin’s idea to bring people into the store with food.

Is that where the ice cream came in?

All the corner drug stores back then dispensed ice cream. A soda fountain was standard. Borun Brothers had sold fixtures for soda fountains; glass cabinets and shelves and gadgets to dispense soft drinks. You’d sit at a stool and say, “I want a chocolate sundae or a milkshake,” that was the thing. Norman had the idea to put tables next to the soda fountain and people would have lunch or dinner there. It didn’t make much money, but it was successful in bringing people into the store. It was a pain in the ass as you can imagine. I actually worked as a stock boy in the ’30s, which I did not like. My uncle was a hard taskmaster for anybody—including me.

What do you remember about the ice cream?

They did their own manufacturing and made a lot of different flavors. They had a plant in West Hollywood and eventually moved the operation to El Monte. It was very high quality and they were very proud to get awards at the L.A. County Fair. The price was quite low so we didn’t make a lot of money off it, but it got people in the store to buy other things. I was never an ice cream person.

So the ice cream was like a loss leader?

Yes it was a loss leader. The idea is to get people to come into the store. They’re not going to come in for a toy or something like that, but ice cream was remarkably successful and very attractive to kids, middle-age people, old people, everybody.

Was that the main thing the store became known for?

There was another gimmick they used to get people involved. Film developing was another gimmick, and that was profitable. They had their own processing plant. People coming in to develop their pictures are different that those getting ice cream. That became its own brand. They also had a private label called BorBro which stands for Borun Brothers, that they used for their own rubbing alcohol and standard stuff you’d find in a drug store.

You never wanted to take over the company?

After the war, my father brought my cousin Leonard Strauss into the business. He asked him to take over because I wasn’t going to do it. I was supposed to, but I said, “No way.” I could see that running a cut-rate drug store is a hell of a life. Leonard was a Harvard law school graduate and had all these ideas about expanding and putting it on the stock exchange. My parents didn’t have education in any of this stuff, they were just merchants, but he came with experience and created this large chain that we sold off. When Rite Aid purchased Thrifty, they kept this ice cream. I’m not particularly sentimental about it.