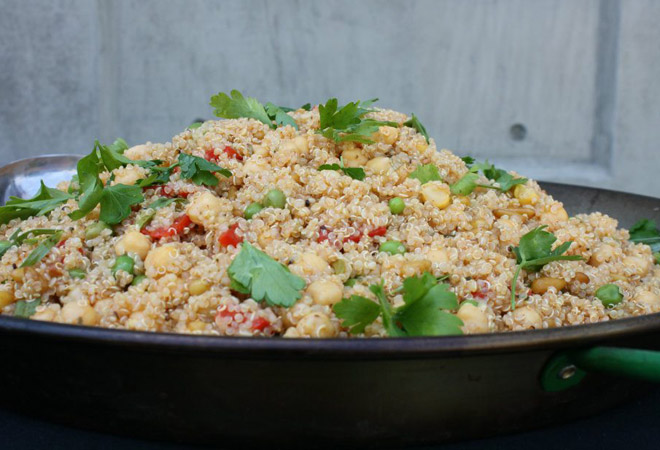 In ancient times the people of Valencia, Spain, would pull up their chairs to an enormous round paella pan as if it were a table, scraping bits of saffron-flecked rice directly into their mouths.

Today, with so many L.A. restaurants touting shared plates and communal seating, it’s no surprise that the classic rice dish is again a la moda. “I have a soft spot for dishes that bring people together,” says Suzanne Goin, who has been hosting paella nights at her restaurant A.O.C. since May. “After ten years of doing small plates, it’s been fun to play around with big plates. Also, the wood oven was just begging for it.”

Downtown’s Lazy Ox Canteen manages to prepare an authentic Valencian version in its conventional oven. A delicious relic from when Spanish chef Perfecto Rocher was in the kitchen earlier this year, the dish may sport hunks of tender chicken as well as beans, paprika, saffron, and sprigs of rosemary.

Wondering where all the mussels and clams are? You just need to move across the Iberian Peninsula. “In Spain, people use the freshest ingredients they can find,” says renowned chef José Andrés of the Bazaar, who has a series of paella “grills” at his Las Vegas spot, Jaleo. “That’s why there are so many regional varieties—mushrooms and rabbits from the countryside or the black paella with squid from the seaside.”

At Bow & Truss in North Hollywood, chef Stefhanie Meyers serves four distinct variations: a vegetarian riff, one with blood sausage and chorizo, another highlighting seafood, and a surf-and-turf combo. “It’s all about the right pan and the right rice,” she says. “We use bomba rice, which stays crunchy inside, while the outside remains soft.” After that, says Meyers, it’s all about leaving the dish alone. “It needs to sit to let the rice caramelize on the bottom.” Valencians call the browned crust socarrat; we call it the best part.

AOC, the Squad and Others Arrested in U.S. Capitol Abortion Protest