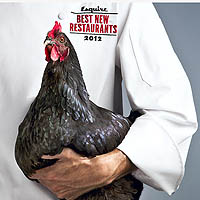 Esquire has released its list of the year’s best new restaurants, and a few Los Angeles spots made the cut. So, where can you “Eat Like A Man” in L.A.?

Gusto
Esquire restaurant critic John Mariani likes that Casanova has “gone back to his roots, with authoritative renderings of Neapolitan pork braciola with a wine-dark rag — and bitter Swiss chard.”

BierBeisl
Mariani notes that, with chef Bernhard Mairinger, you get more than just “wursts and some rare Austrian brews.” He awards bonus points for unexpected dishes like “käsekrainer sausage pumped up with oozy Emmentaler cheese and sharp pepper.”

Bäco Mercat
Mariani insists “It’s not about the sandwiches” at Josef Centeno’s spot, and praises the “deeply satisfying food, crunchy, tender, spicy, each item different and novel, like blistered okra with tomato, mint, and basil.”

Three cheers for the big winners! We gotta say, we stand by their picks—all three are heartfelt, chef-driven endeavors that are among our more frequented dining destinations, lately. Will they top our Best New Restaurants list in January? You’ll have to wait and see.

So, who’d they miss? We would have loved to see Tar & Roses, Cooks County, or Black Hogg make an appearance, but then again, we’re just fine keeping those gems all for ourselves.