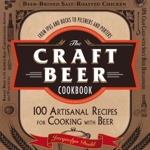 Writing about beer writing… how deep is that? How could I not, when there are two excellent new releases from local writers on my favorite subject now on bookshelves? And another on the way… The Everything Hard Cider Book: All you need to know about making hard cider at home (Sep 2013) | Pasadena homebrewer (and previous Jeopardy! champion) Drew Beechum has penned a definitive guide to home cider making that will benefit rookies and veterans alike. And we’re not talking about the cloyingly sweet soda-like stuff you find in grocery stores. Nor or we talking about the mass-market brands you find in the beer aisle, generally made from lackluster apple concentrate. This is real hard cider that you can craft yourself. Beechum walks you through the whole process, covering everything from equipment, ingredient sourcing, flavoring with herbs and spices, fermentation, and of course bottling. Eighty recipes—covering apple and other fruit ciders—round out the book, helping you craft your own tasty libation any way you like it: from desert-dry to dessert-sweet. Beer Lover’s Southern California: Best Breweries, Brewpubs & Beer Bars (Jan 2014) | Kristofor “Kip” Barnes has somehow managed to squeeze in an insane number of SoCal brewery and bar visits to put together what looks to be a definitive guide on our best local watering holes. The “tough work, but someone’s gotta do it” adage takes on an even deeper meaning when you learn that Kip’s managed to do all this drinking research while being in the middle of starting up his own brewery, Los Angeles Ale Works, and keeping up with his beer blog, Bierkast. I don’t know when he sleeps, but I’m looking forward to his book’s release in January.