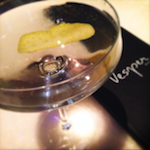 Even though Los Angeles has a growing, thriving, and vibrant cocktail scene, you’ll be surprised to learn that our awesome bartenders and cocktails don’t get nearly as much attention as other more popular cocktailing cities like New York, Portland, and San Francisco. Crazy, I know.

I mean, our bartenders take command of trends and create new ones. Here, the cocktail programs run the gamut of farm-to-glass craft cocktails to whimsical boozy popsicles to alcoholic ice cream.

Since the L.A. cocktail scene initially drew inspiration from New York, I figured it would be fun to ask a few of the best bartenders from around the country for a cocktail shoutout. Here they’ve come up with cocktails inspired by our fine metropolis.

Portland: Jeffrey Morgenthaler of Clyde Common is a highly respected barman and creator of many Next Big Things. (You can thank him for the popularity of barrel-aged cocktails and carbonated bottled cocktails.) His drink idea came to him during an L.A. visit. “I’d say that the drink I most often associate with L.A. would be our ‘I, Chihuahua.’ Tequila, lemon, orange marmalade, soda. I had the idea while sitting at the Chateau Marmont drinking a French 75 earlier this year.”

Las Vegas: Roger Gross, Vesper Bar in the Cosmopolitan Las Vegas, is the man cocktailers flock to for well-made bespoke drinks in Sin City. For his “Hollywood Swinger” cocktail he drew inspiration from L.A. bartender friends like Zahra Bates and Cari Hah. It’s made with “Nolet’s Silver for the silver screen with rose essence for Pasadena, Creme de Violette to enhance that rose essence, L.A.’s Art in the Age Rhubarb, Dolin Blanc to smooth things out, Bitter Truth orange bitters, and Veuve Clicquot for a little sparkle.”

New York: Pamela Wiznitzer, bartender at Dead Rabbit, NYC’s winningest bar this year (Tales of the Cocktail 2013 awards for World’s Best New Cocktail Bar, World’s Best Cocktail Menu, and International Bartender of the Year), created an ode to the latest craze in L.A.: “Something that happened there first, one of the crazes that happened on the West Coast and migrated east was the juice craze. And now everyone is doing it. In L.A., every place has fresh pressed juices, so I wanted to do an ode to that.” For her cocktail, which she calls “Fast Times,” she used frambois eau de vie, raspberry cordial, fresh pressed cucumber juice, lemon juice, orange juice, dry curacao, and Bittermens Burlesque bitters. “So it’s an ode to the healthy eating out there and the fresh produce that I see. This is something you could sip in the sunshine.”

New York: Otis Florence, bartender at Pouring Ribbons and Attaboy, recently did a couple of guest bartending gigs at Eveleigh and Harvard & Stone, which gave birth to his “Let’s Have a Tiki” (Beefeater Gin, Dolin Blanc, pineapple juice, lime juice, simple syrup, and Peychaud’s bitters). So what about this drink says L.A.? “It has classic proportions for a tiki cocktail which usually happens in the Caribbean. So I took that and applied it to L.A. because it’s really sunny, really bright, it’s really warm and friendly.”

San Diego: Erick Castro, bartender/proprietor of Polite Provisions, was the co-creator of Sacramento’s Midtown Cocktail Week and afterward became one of San Francisco’s preeminent barmen working at notable watering holes Bourbon & Branch and Rickhouse. Now he owns and bartends at Polite Provisions, which opened in San Diego this year, and he shows his L.A. cocktail love with “The Naughty Dog.” “It is a twist on a ‘Colorado Bulldog,’ which is a twist on a ‘White Russian,’ because The Big Lebowski always reminds me of White Russians. Love the ease of making them. No bar tools required!”

Coincidentally, this cocktail will debut on the Polite Provisions menu this month. Or here’s the recipe to make it for yourself at home. It’s so easy that even a Dude could do it.

Build in Collins glass over ice. Add the rum and Kahlua, then top with root beer and a float of the heavy cream. Garnish with fresh nutmeg and a mint sprig.