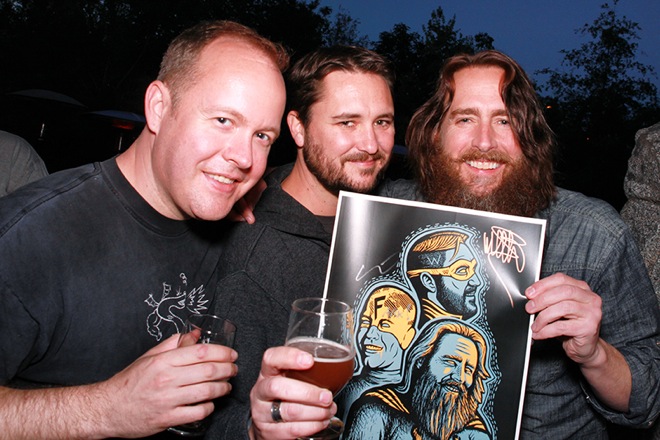 ➳ Actor/professional geek Wil Wheaton, when not busy devouring burritos from Poquito Mas, is an avid homebrewer who has gotten chummy with Stone Brewing Co. CEO Greg Koch over the years. A few months back, he and fellow nerd sensation Drew Curtis of Fark.com were invited to participate in a collaboration beer with Koch, and now, Wil’s taking over the taps at Stone Company Store location in Pasadena on Monday, October 28 from 6 to 8 p.m., pouring a very special line-up of beers including some serious rarities like the 2004 Stone Old Guardian Barley Wine, six iterations of the Stone Vertical Epic Ale series (from ’03, ’04, ’06, ’07, ’09, and ’11), and of course, their own delicious brew: Drew Curtis/Wil Wheaton/Greg Koch Stone Farking Wheaton w00tstout.

Ten percent of the evening’s beer sales will be donated to the Pasadena Humane Society & SPCA.

➳ Hop heads rejoice! In a matter of weeks, L.A. will be getting its very own IPA Festival, thanks to the folks at craft beer hotspot Mohawk Bend in Echo Park. IPAs, or India Pale Ales, are the most popular craft beer style in America and West Coast breweries are known for making them best. Chock full of hops, they deliver a wallop to the nose and palate, and are usually quite bitter and rich with piney, grassy, citrusy, or sometimes tropical fruit notes, depending on the variety used.

Over 60 IPAs will be on tap the weekend of November 16-17, some of which aren’t often seen in Los Angeles, including treats from San Diego brewers Alpine Beer Company, Automatic Brewing Co., and Societe Brewing Co.

And, there will be a competition component to it all! Each participating brewery will have one beer on tap. Guests in attendance will be able to order as they please, and with each IPA they buy, they’ll get a score card where they can write the name of the beer and give it a simple rating from 1 to 5. Votes from both days will be tallied Sunday afternoon for a People’s Choice award that will be announced around 4 p.m. Additionally, there will be a very respectable line-up of around 20 professional brewers and IPA experts conducting their own adjudication, including Tomme Arthur (Port Brewing/The Lost Abbey), Jeff Bagby (Bagby Beer Co.), Pat McIlhenney (Alpine Beer Company), and Mitch Steele (Stone Brewing Co.), among others.

“We’ve always been big fans of IPAs,” explains Tony Yanow, owner of Mohawk Bend, Tony’s Darts Away, and co-owner of Golden Road Brewing. “But we wanted an opportunity for people to taste all of their favorites together… to be able to compare them all and maybe find a new favorite.”

Mohawk Bend’s central bar area will be open seating both days (November 16-17) and there is no cover charge to enter for the IPA Festival, but if you’d like to reserve a table, you can do so now by emailing [email protected] with the time you’d like to book, your name, phone number, and the number of guests in your party.
Due to high demand, there will be a $30 per person minimum and 1.5 hour limit on all table reservations.

➳ And while we provided some mighty fine coverage of the Great American Beer Festival and the glorious medals rightfully bestowed on our local brewers, there was someone else in attendance that deserves some attention: Triumph the Insult Comic Dog. That’s right… he put all of us beer geeks in our place, and we can’t help but laugh. Hope it brings you a chuckle as well.