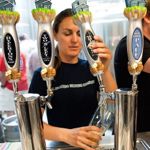 International Stout Day is this Friday, November 8th! Organizer Erin Peters is bringing this dark-beer-centric holiday back for a third year, with events all around the country. While they are all largely informal, and you can indeed “celebrate” by simply cracking a stout in the comfort of your own home to be a part of the movement, Peters is also hosting an official homage to stouts at City Tavern in Culver City beginning at 5 p.m. A special line-up of six to eight stouts will be available, including Firestone Walker Velvet Merkin, Older Viscosity and Santa’s Little Helper from Port Brewing Co., The Bruery’s Tart of Darkness, Cismontane Blacks Dawn, and Highwater Campfire. [More information]

➻ Monkish Brewing Co. has been cranking out delicious draft beers in Torrance since opening in 2011. Now, they’ve turned their sights on bottling. Feminist—a wonderful Belgian-style tripel beer spiced and tinted pink with a healthy dose of hibiscus flowers—is their first 750mL bottle offering, available at the brewery and in select retailers around town. The Los Angeles Times reports: “Monkish is planning at least three more bottle releases before the end of the year, including a special Christmas beer for the holidays.”

➻ El Segundo Brewing Co.’s taproom is now open daily. Pints, tasters, and growler fills are now available Monday through Thursday, from 4:30 p.m. until 9 p.m., Friday from 4:30 p.m. until 10 p.m., Saturday from noon until 10 p.m., and Sunday from noon until 8 p.m. Also keep an eye out for their newest release: Smoky Hollow, a Scotch-style ale with a “bready, malty, and mellow caramel base [that] builds the stage for a complex character of peat, earth, and smoke reminiscent of the great Scotch whiskeys of Islay.”