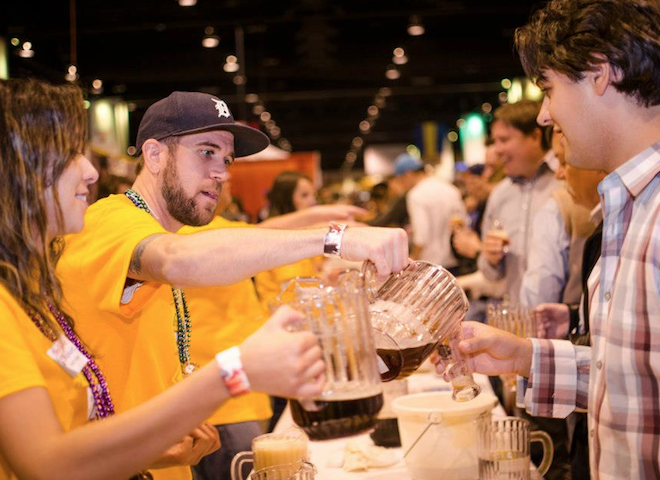 The Great American Beer Festival is taking place in Denver this weekend, bringing together 618 of the country’s craft breweries for what’s become the largest beer competition in the United States. Not only did the 49,000+ attendee tickets sell out quickly this year, the record number of breweries now in operation exceeded the number of available industry slots, leaving over 350 breweries on a waiting list, many of which—like Eagle Rock Brewery, Ohana Brewing, and Anaheim’s Noble Ale Works—aren’t able to attend.

Julia Herz, Craft Beer Program Director at the Brewers Association, the industry group behind the Great American Beer Festival, feels the frustration many locked out brewers are facing, but says assuredly, “It’s something we’re taking very seriously. We’ve had countless meetings on how to expand the festival in future years to match the explosive growth of craft breweries in the U.S. But at the same time, this is held in the Colorado Convention Center, which books up years in advance. We can’t just call and say, ‘Hey! We need more space!’ and expect to get it right away.”

In the end, the Brewers Association was able to let Eagle Rock Brewery enter two beers for judging consideration. And while Eagle Rock Brewery co-owner (and past GABF gold medal winner) Jeremy Raub was initially shocked at how quickly the spaces filled up, he’s taking it as a bit of a blessing. “We’re saving a bunch of money by not going this year,” he says. “Sure, we’d love to be there, but this will allow us some time to keep focusing on all of our projects here at home, and I’m OK with that. There’s always next year.”

Brew Dogs is a new television series revolving around craft beer that’s debuted on the recently launched Esquire TV network. It follows James Watt and Martin Dickie, co-founders of BrewDog, the U.K.’s most infamous brewery. While frequently marginalized for their over-the-top, gimmicky marketing (think “Royal Virility Performance”, an IPA laced with Viagra to commemorate the Kate Middleton/Prince William nuptials, and “The End of the World”—formerly known as the strongest beer in the world—which was brewed and freeze-distilled to weigh in at 55% alcohol by volume, before getting its bottles stuffed within taxidermied squirrels and stoats), the Scottish duo does turn out a solid line-up of core beers and special releases.

Their new show brings them to America on a quest to visit some of the best craft breweries, restaurants, and bars in select cities, brewing batches of highly experimental beer with them, and searching around the respective cities for “craft beer virgins” that they hope to convert. The debut episode finds them in San Diego, brewing an IPA with Stone Brewing Co. CEO and co-founder, Greg Koch. Did I mention that it’s spiked with kelp they’ve harvested from the Pacific Ocean? And rosemary from Stone Brewing? And one of the world’s hottest chiles? And that it’s brewed on a moving train? A custom brewing system was installed on a train car tugged by the Pacific Surfliner, headed from San Diego to Los Angeles and back.

A quick stop in Union Station to find more “craft beer virgins” is the only shout-out L.A. gets, but we have a feeling they’ll be back soon, as our local craft beer scene continues to flourish. While the show can be a bit overdone at times, it’s a great watch for anyone who’s really starting to get into craft beer.