Home Uncategorized This Just In: Walter Manzke and Bill Chait Get Ready to Open... 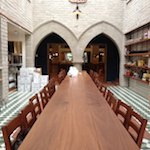 This afternoon, chef Walter Manzke was elbow deep in a container of lemon water, peeling artichokes. It’s a task that most chefs of Manzke’s caliber would relegate to a prep cook or commis, but Manzke is cheerful while he works. He’s getting ready to serve the first set of diners lucky enough to be invited into Republique, a restaurant taking over the old Campanile space that the multi-starred chef has been dreaming of and working toward for over five years.

“It’s heavily influenced by the bistronomie movement in France, where you take a classic bistro dish and elevate it with local ingredients or a more modern interpretation,” says Manzke as he cuts the top off a bright green artichoke flower. “I have the menu pretty much set, but a lot is going to change before we open on November 25. It’s still evolving.” He talks about a frisée salad with lardon, a classic dish traditionally finished with a poached egg, and how he’s accented his with wood oven roasted Brussels sprouts and fried Brussels sprout leaves.

Speaking of ovens—Manzke has five different hot boxes at Republique. There’s a convection in the pastry department, located upstairs in the space that was once where La Brea Bakery made their bread; a wood-burning pizza-style version (“I’ll be using that mostly for meats, fish, and chicken.”); a fireplace-type spit, facing the central dining room where he can cook anything from whole fish to small suckling pigs; a French deck oven for the baguettes and boules that Marge Manzke is making using a tiny bit of starter she received as a gift from baker Zoe Nathan; convention ovens for finishing sautéed dishes on the line; and finally, two neat little Rational ovens made in Germany. “They’re so precise. You can set the temperature, steam, everything, where you want the heat to come from, for how long, and at any time of day or night,” gushes Manzke, who designed the restaurant, including the kitchen, himself.

“Is it my dream kitchen? Well, it’s everything I wanted for this space. We wanted to honor this space and its history. None of the walls were moved or taken out. We had to change the floor because all of the plumbing had to be redone, but if you look at the stairs, we kept the original hand-painted tiles. We kept the fountain, but we moved it outside, which is where it was supposed to be, originally,” explains Manzke. He talks about only wanting to bring in materials and designs that Charlie Chaplin, who used the building as an office in the 1920s, might have picked out.

Erik Lund, who worked with Julian Cox and at Mess Hall, is doing the bar program here. He’s worked closely with Manzke to develop a highly functional list. Looking for a good drink at the bar? No problem. But need something that might help you ease into a few appetizers? You’ll find that too. There is, of course, also an extensive wine list.

Last week, as Republique was setting up its website, Facebook page, and OpenTable system, their reservation system accidentally went live. Rather than cancel on those early diners, Republique is honoring those reservations and only taking a total of 50 reservations each evening (starting this weekend) until they open to walk-ins and for breakfast on November 25.

“Luckily,” says Manzke with a smile, “Petty Cash is around the corner, and it’s in a good place, so I can focus on this now. We worked really hard to get it where it is. It’s been a long time coming.”