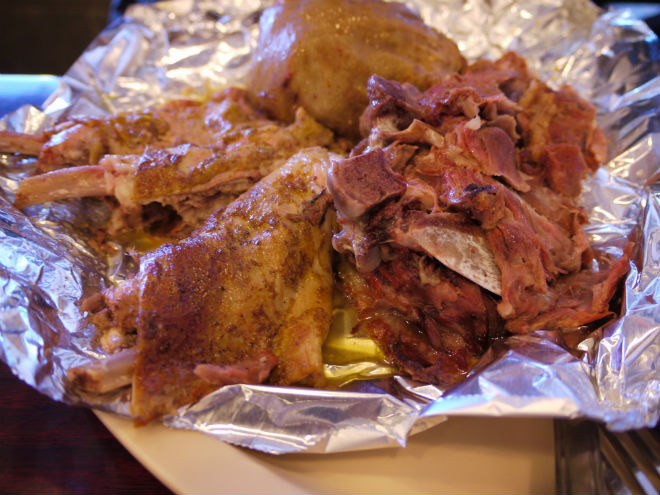 Traditional Mexican barbacoa de borrego, or lamb barbacoa is a cultural and culinary marker, in the same vein as Neopolitan pizza, Kyushu ramen, and Berberian couscous. It’s available in every Mexican state, but only the trusted artisans of Hidalgo—who demonstrate the greatest knowhow—the state of Mexico, and Tlaxcala draw serious eaters. There are other Mexican states that do decent barbacoa: Puebla, Guerrero, and Oaxaca (better known for their goat barbacoa), but these styles are less coveted.

We have most of these varieties in L.A., but none are artisanal. None are destinations, and most are made by mere dilettantes. The closest barbacoa master north of the border has been Francisco Perez’s Chula Vista-based Aqui es Texcoco. Perez learned the craft from his uncle, who started his barbacoa training in Texcoco, Estado de Mexico. After moving to Tijuana back in 1990, he taught his sister and the young Perez the barbacoa trade.

Fracisco “Paco” Perez later became an engineer and found work in Spain, but his passion for barbacoa drew him back to Tijuana to work with his mother (his uncle retired). Soon after, he opened Aqui es Texcoco in Chula Vista.

I’ve been an advocate for Aqui es Texcoco since 2008, and now I’m happy to report that Perez has taken over the La Pasta Vino space in Commerce. The best barbacoa in SoCal is about to get a whole lot closer to central L.A. Perez expects his second location to be open by mid-January 2014.

The Commerce location will have Perez’s traditional Texcoco-style barbacoa, whole lamb heads, pancita (offal-stuffed stomach) served with all the fixings; mixiotes, or rabbit in parchment; and once the liquor license arrives—hopefully sometime in February—Perez will have Mexican beer, and the only true pulque (fermented agave drink) served in the greater Los Angeles metropolitan area. There will also be full coffee service at the northernmost branch of this famed restaurant. The barbacoa game in L.A.? It’s about to get real.