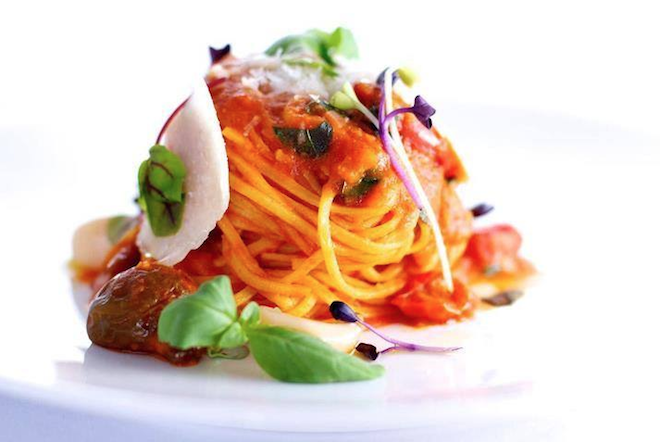 Chef and former Top Cheffer Alex Reznik has been laying low for the better part of the past year. Sure, he’s popped up here and there, but he’s mostly been taking some time off. Reznik and his girlfriend welcomed a baby girl into their lives five months ago. And that’s when the idea for Ditmas Kitchen & Cocktails, the restaurant he plans to open next month, started to take shape.

“I looked into my daughter’s eyes and I thought, ‘I need to do this, I need to create this for her,’” says Reznik, beaming. It’s a whole new perspective for the guy Top Chef producers liked to portray as a ruthless competitor in the series’ seventh season. “I grew up on Ditmas Street in Brooklyn,” says Reznik, “and all through my childhood, my mother and my grandmother would be in the kitchen cooking something. This restaurant is inspired by those memories.”

Reznik says he’s working with designers to create a space that feels comfortable, but also transporting. “New York, for me, for many people, it’s not just a place. It’s a feeling,” the chef relates, “I want to create that feeling here for my new family, and for the community.”

The restaurant, located near the corner of Pico and Robertson, will serve a menu of contemporary American fare. “I’m making some dishes in the style of what I grew up with, and though everything is going to be fresh and made with California produce, that’s not my main inspiration here. I’m not going to the farmers’ market and seeing Fava beans and thinking, ‘Oh my god, I have to cook these right this second and put them on the menu!’ Of course, that may happen, but that’s not the point [at Ditmas.]”

Friends and family and the neighborhood will be welcomed to dine at several communal tables throughout the space, each seating 16 to 20. “I’m hoping it’s a place where people can get a drink after work, or where long-lost friends can meet and catch up over a comforting meal,” says Reznik.

The urban feel of the dining room will compliment dishes like corned beef lamb belly, and (!) Sriracha fried chicken. A starter of Yellowtail crudo with puffed rice and tarragon essence speaks to Reznik’s formal training. A massive pasta machine will dominate the (certified Kosher) kitchen, and provide the menu with a varying selection of every different kind of filled and cut pasta imaginable.

“When I was growing up, we always had dinner five nights a week at home. I remember there was a rotating cast of relatives and friends that would gather with us around the table. My mom always cooked huge amounts of food. My dad would go to the freezer and pull out the vodka and we’d sip on it or do shots. I want to recreate that sense of place for my family here. This is what Ditmas is for me, for my family. It’s a restaurant in L.A. that pays tribute to my memories of home.”