Home Uncategorized This is What You Should Be Drinking This Fall 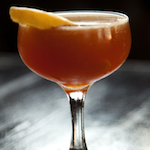 It’s now the season of the pumpkin spice latte, which means it’s time to bid adieu to those tall iced poolside drinks and colorful cocktails with summery produce and light ingredients. For the chilly autumn, our L.A. bartenders are creating libations with less ice, richer flavors, more spices and warm aromas to cozy up to.

The fall drink lists are just now debuting but with so many delicious choices I asked the drinkmakers themselves to pick their one favorite out of all their new creations. It was tough but they did it. Here are the cocktails with which they want to toast the new season.

Barman Christiaan Rollich’s new fall cocktails at Lucques, AOC, and Tavern will become available on Saturday. Out of the 10, he picked the “White Elephant” at Lucques as his ultimate fave. “I am a sucker for the White Elephant, a coconut spicy gingery totally fun Southeast Asian drink. I had traveled through the Golden Triangle eating the food of the villages and seeing and experiencing their lifestyle and food.” “The White Elephant” is a mix of Matusalem Rum, St. George Rum Agricole, lime juice, cilantro leaves, and Christiaan’s own premix of coconut, ginger, Thai chile, and sugar.

At Sotto, co-bar directors Brynn Smith and Ingrid Nelson have just debuted their new fall cocktail menu but Brynn picks the “Bada Bing!” as her drink of choice. “Because it is different and unusual. Love how my favorite tequila (Ocho Reposado) and the Luxardo Sambuca, and the Torani Amer blend well together to create a beautiful complex and balanced Aromatic. Notes of vanilla, bitter orange, and subtle black licorice and the flavors of the Burlesque bitters and Licor 43 help elevate the cocktail and round it out. I want to drink it every time I make it! Perfect to have after a long day at work!”

If you’re seeking a pumpkin cocktail minus that syrupy sweetness, check out the “Hoodlum” by Beau du Bois at Corner Door in West L.A. It just happens to be Beau’s favorite as well. “Ever since completing the final recipe, I’ve been addicted to the ‘Hoodlum’: VSOP Armagnac, house-made pumpkin beer liqueur and peated clove tincture. The fall spice from the pumpkin beer liqueur highlights the ginger and pepper notes in the Armagnac, while the tincture adds a small touch of smoke without polarizing it. Each sip reminds me of the fall nights back in Indiana.”

Bartender Karen Grill has had “24th ½ Century” as a cocktail name in her back pocket for awhile and it wasn’t til she consulted on the cocktail program at The Churchill in Mid-City West that she was finally able to use it. But in addition to the cute name (inspired by Daffy Duck’s galactic adventures), it’s a tasty cocktail. “I really like how this riff on the 18th Century came out by using Blended scotch, white cacao and Punt e Mes. The combination led to a complex cocktail with really nice chocolate, caramel and spiced flavors for fall.”

At Circa in Manhattan Beach, mixmaster Josh Goldman picked the bottled “Moscow Mule” off the new menu which launched this week. Keep in mind, it’s not just a plain ol’ “Moscow Mule.” “We ferment our own ginger beer and bottle it with vodka giving a fully carbonated complex drink that only takes a few seconds to serve,” he said. “Manhattan Beach loves their ‘Moscow Mules’ and we figured out a way to make it delicious and fast for them.”

At new Hollywood nightlife venue Warwick, its cocktail creators Jason Bran and Damian Windsor are of one mind in picking the “Blackberry Buck.” “I would recommend the most fall-like cocktail. Currently on the list would be ‘Blackberry Buck.’ Cookie spices, ginger beer and blackberries with bourbon,” said Damian.”It’s spicy and fruity and sweet and sour. It’s not a passive drink, you need to be ready for it. It’s bold and spirituous.” Jason added, “Who doesn’t like cookie spices this time of year?”

For “fall in a glass” Jeremy Lake of Crossroads is all about his new “Lady From Shanghai” cocktail made with fig eau de vie, dark rum, autumn syrup (apples, figs, blackberries, spices), Pink Lady apple kombucha, garnished with fig and cinnamon. “If that doesn’t sound like an enticing fall cocktail, then I don’t know what does. And it pairs very well with any of Chef Tal Ronnen’s salads or the spiced chickpeas,” said Jeremy.

At the brand-new downtown bar Honeycut, which celebrated its official grand opening on Tuesday, guests have 50 cocktails to choose from. But cocktail maker Alex Day picked the “Deadpan” as the perfect cocktail to celebrate the season, with its toasted sesame El Dorado 12yr rum, Pierre Ferrand 1840 cognac, Lustau East India Solera Sherry, and Miracle Mile Honeycut Aromatic Bitters. “The Deadpan is such a fascinating cocktail,” said Alex. “At its core, it’s comforting in a way that only sherry can accomplish — an underlying richness that props up the rum and cognac, base spirits that are so fantastically appropriate for fall. Sesame adds the slightest savory angle, but all told, the Deadpan is a straightforward nod to the Old Fashioned. Ain’t nothin wrong with that when the weather starts changing.”