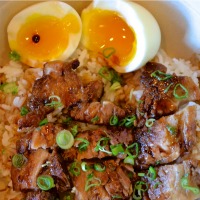 Eric de la Cruz, Kareem Lacey, and Paul King, the three guys who own and operate Oi Asian Fusion in Reseda probably don’t care much about how other people run restaurants. Frankly, they groove to their own beat. And better yet if that beat is set to an Eric B. and Rakim jam—something you might hear in heavy rotation on Oi’s playlist.

Their training is more Food Network than culinary school. Chef de la Cruz, Oi’s ringleader, has about one month’s worth of cooking school under his apron, but that doesn’t keep him and his partners from dishing up some of the most inventive, soulful, and satisfying Asian fusion (yep, they’re not afraid of using the f-word!) comfort food in the entirety of the San Fernando Valley and possibly L.A. itself. Not only is Asian fusion not a bad word at Oi (which is pronounced oy and translates into an interjection like “yo” or “eh”), the foundation of this fusion is actually Filipino.

Oi puts a fresh spin on Filipino cuisine—arguably a cuisine that’s struggled to catch the attention of the masses. Tired of turo-turo Filipino food that’s been sitting on steam tables for hours, Chef de la Cruz offers diners made-to-order fare that blends Asian flavors in a rice bowl. Inspired by Roy Choi’s Chego!, this Reseda hole-in-the-wall is like Chego’s Filipino brother from another mother.

There are a lot of stand outs here, including the adobo pork bowl, karaage fried chicken bun, and kimchi mash potato. But the must-taste here is their karaage rice bowl. It combines garlicky, crunchy, fried chicken chunks sprinkled with sesame seeds and nori, crispy sweet pickled radish, and steamed rice with a fish sauce-infused umami gravy. It’s the very definition of Asian comfort food. If you like loco moco and fried chicken, this bowl is the best of both of those worlds.

Oi Asian Fusion is one of the best kept Asian soul food secrets in Los Angeles, but with local fans like Nguyen Tran of Starry Kitchen and Anthony Chin of Horse Thief BBQ, it won’t be hush-hush for much longer. Go get a taste now!

(The restaurant will be moving in mid-March to 7242 Canoga Ave., Canoga Park)