Home Food & Drink This Hotel Has 200 Rooms, All Made of Chocolate 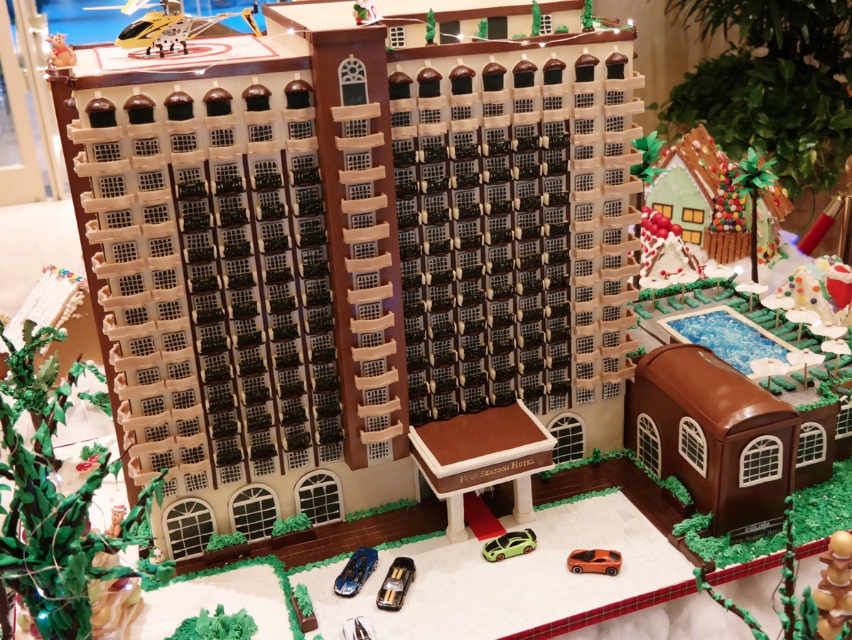 Culina’s pastry chef Federico Fernandez knew he wanted to create a replica of the Four Seasons Hotel, but he couldn’t quite figure out how to do it to scale. His solution? He called his dad, Jorge Fernandez, who, as luck would have it, is an architect in Argentina. Still, even with the professional advice, the construction was a huge undertaking.

“The project took six weeks to complete and I also used Google images as well as multiple coats of chocolate paint mixing dark and white chocolate to get the right tone that matches the exterior of our hotel,” says Fernandez.

The time spent is not surprising—the replica has over ten floors, 200 rooms, and 20 gingerbread mansions. “Amenities” include a pool and some lovely umbrella-shaded chairs to lounge in. At the front of the structure, there’s a driveway with lots of fancy (toy) cars. There are also plenty of palm trees and, of course, a helipad for the highest of rollers.

On display in the Four Season’s lobby until January 1, the entire chocolate hotel will be sold with the help of Bravo’s Million Dollar Listing Los Angeles star and real estate agent Josh Flagg with proceeds going to  Toys for Tots. Businesses and individuals can support the cause by “reserving” a room for $550. The gingerbread houses can be bought outright for $5,000 a piece. No listing price available for the hotel, but if you’re interested, you can call the front desk.

There’s a New Bloody Mary in Town, Just in Time for Your Weekend