Home Uncategorized Things We Like: Bouchon’s $36 Bucket of Fried Chicken 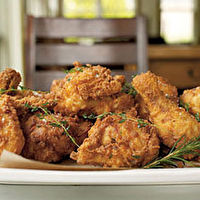 The price? $36 a bucket, which is a suprising deal all things considered. Sure, it’s quite a bit more expensive than the KFC variety, but if you’ve ever tasted this fried chicken, you’ll understand why it’s worth the price.

Here’s hoping party-sized high cuisine is a trend in the making. Just imagine: a quart container of Red O’s guacamole, a foot-long Air Philly Cheesesteak from Bazaar, and a family-sized tray of Animal’s oxtail poutine. A menu like that would certainly liven up our next house party.