Home Uncategorized They Came From the Far Corners of L.A. for The Prime Rib 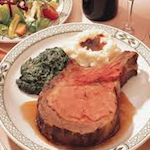 The first person stood in line at 2:34 a.m. to get a seat at Lawry’s 75 year old table. Today only, starting at 11 a.m., fans and friends of the restaurant (as well as, let’s face it, a few deal hounds) closed in on the Beverly Hills location of Lawry’s The Prime Rib to enjoy a steak dinner for just $1.25.

By noon today, La Cienega was backed up in both directions and nearby parking lots were full. More than 1,000 people showed up to get the meal deal, but only exactly 1,000 wristbands were given out. Lawry’s is not serving any regularly priced meals this afternoon; the 400 seat restaurant is serving 1,000 people the special meal and then closing up until dinner tonight. Hundreds of people came from all over the city only to be told they were too late. But for the 1,000 that got a wristband and waited in line, it was a good day.

Mrs. Henry (“just call me Mrs. Henry, ok?”) came all the way from Rancho Cucamonga to stand in line at 8:30 a.m. She waited in line for three hours to get her meal. “It’s like it’s my birthday!”

Linda and Tony Sevilla drove over from Glendale. “We’re regulars at Lawry’s and Tam O’Shanter.” When asked what her favorite menu items were, she said, “Well, he [pointing at her husband] likes the steak. But I prefer the end cut.”

Angela Mathews lives a few miles away and has been eating at Lawry’s every Monday for the past 25 years. “My favorite is the English cut, and I always get the shrimp cocktail with horseradish.”

But the luckiest person of the day was probably Rob Jenkins who lives in Pico-Crenshaw. He heard about the promotion this morning on CBS and was the 1,000th person to get a wristband at 9:30 a.m. this morning. “I’m going to get the prime rib … and that salad, and also some garlic potatoes.”

For the First Time in 30 Years, Changes Are Coming to This Iconic L.A. Restaurant