Home Dining There’s a Veggie Burger That Bleeds Now, and Here’s Where You Can... 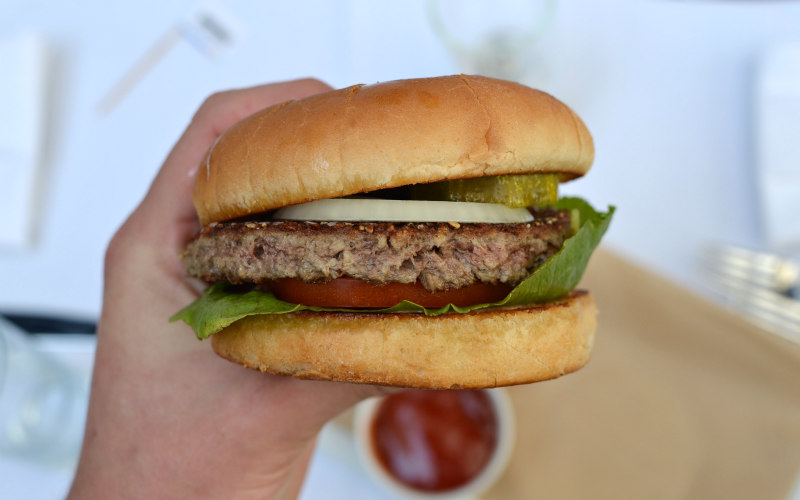 Vegetables can’t think, or feel, or love, or cry over the movie adaptations of Nicholas Sparks books—but damn if they don’t bleed just like us.

The Impossible Burger, which has been shorthand dubbed “the veggie burger that bleeds” by everyone and their mom, officially made its L.A. debut at Crossroads in Hollywood. The bloody mass of plant matter was developed by Silicon Valley startup Impossible Foods, which, thanks in part to Bill Gates and Google Ventures, raised $108 million in series D funding last year. That’s a lot of cash to disrupt a space currently occupied by Morningstar Meatless Hickory BBQ Riblets (which are actually pretty solid).

(RELATED: In-N-Out Has a Veggie Burger Problem, and Here’s How They Can Solve It)

But Impossible Foods is doing something a little bit more complicated than mixing soy curds with MSG and potato starch and calling it a riblet. The key to the hyperrealistic fake burger is a molecule that carries oxygen in blood called leghemoglobin, or “heme” for short. Heme naturally occurs in vegetables and legumes, so Impossible Foods took the gene that encodes heme in soybeans and transferred it to yeast to reduce the environmental impact that would come from using soybeans themselves.

That’s like the Xzibit meme of environmentalism: Hey dawg, I heard you like sustainability, so we made your sustainable burger sustainable so you can sustain while you’re sustaining.

Unlike their rival bloody veggie burger from Beyond Meat, which bleeds beet juice, the Impossible Burger bleeds real fake plant blood. I think? Science is hard. All you have to know is that it costs $14, it’s available at Crossroads, and it’s a complete mindfuck.

I wish my veggie burger was a little more on the rare side so I could’ve actually tasted the blood.

Before today, that would have been a very confusing sentence to read. But now it seems so reasonable, right? The cook on it wasn’t bad by any means—there was a super hard sear on the outside and it was liberally seasoned with salt and coarse-ground pepper—but it was pretty far on the medium-well side. At first glance, it almost looks like a real burger. Like, it’s super, super close to looking like a real burger, but there’s something not quite right about the way the edges form into a perfect cylinder instead of rounding themselves off in the cooking process. However, if you took the meat patty out of a Buttery Jack from Jack in the Box, you would also say that there’s something not quite right about it. You’d say it looks pretty similar to ground beef, but the gray tinge and strange, pock-marked patterning on the meat disc manages to miss the mark. So if we aren’t issuing deductions to the Buttery Jack for that, then we must not issue deductions to the Impossible Burger.

If someone had handed me this burger from a drive-thru window wrapped in foil, I would’ve eaten it while road raging at people in traffic and had no idea that it wasn’t meat. And I guess that’s the point. Chef Tal Ronnen said he tried to emulate the quintessential fast-food burger to honor SoCal—squishy bun, raw onion, leaf lettuce, tomato, and thick slices of dill pickle all ready to be slathered in ketchup—and he serves it along with fries that would be a dead ringer for McDonald’s if not for the occasional clipping of parsley. In context of the white tablecloths and green juices at Crossroads, the Impossible Burger seems out of place. That out-of-placeness might make you question why anyone would spend $14 to eat something that essentially tastes like a Jack in the Box analog.

But then you slap yourself in the face and realize that this isn’t a burger, this is a science project five years and hundreds of millions of dollars in the making and it’s laying the groundwork for ending our emotional and physical reliance on meat, which would have drastic positive effects on curbing climate change, which means that you’re not eating lunch, you’re literally eating the future. I’d pay, like, $16 for that, easy.