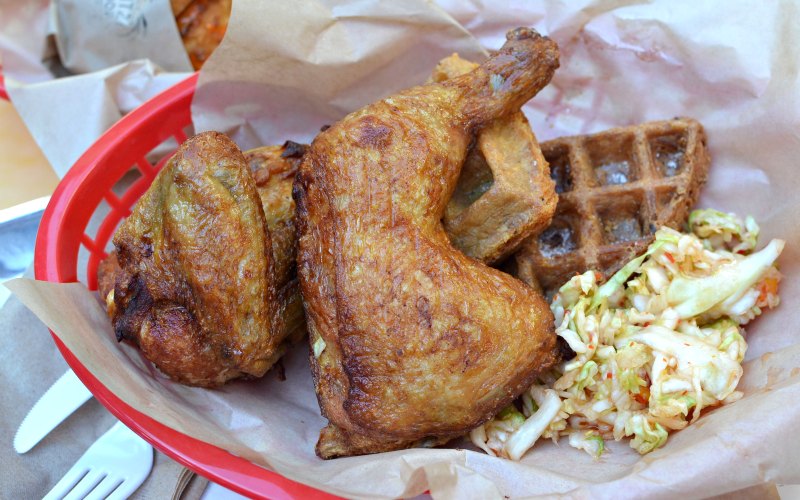 Fried chicken is the best. That’s not a hard idea to sell. To quote Donald Trump, “You know it; I know it; everybody knows it.” It’s crispy, crunchy, salty, and a microcosm of all things good in the world. But it’s also a one-way ticket to a day-ending food coma. Once you eat a bunch of fried chicken, you’re done. All you can do is lie down, close your eyes, and hit the reset button to start anew. Half a fried chicken from KFC comes in at more than a thousand calories. You don’t recover from that. Rotisserie chicken is not the best. It is almost the best, because it is still juicy and salty chicken, but you’re always going to miss the crispy-crunchiness of fried chicken. The main argument for rotisserie chicken is that it does not end your day prematurely. Rotisserie chicken is a utility player. You can easily put down a half non-fried chicken during a casual weekday lunch and still be a human being. It actually makes you feel like you made a responsible decision, and that’s part of what you’re paying for.

RELATED: 17 Fried Chicken Sandwiches You Need to Eat Before You Die What if there was a third option? Some sort of hybrid bird that has the correct proportion health benefits and soul satisfying crunchiness?

OH BUT THERE IS.

It’s called “Naked Fried Chicken” and it’s at The Original Farmer’s Market. Chef Neal Fraser’s Fritzi Dog (they served hot dogs) rebranded and is now Fritzi Coop (they serve fried chicken). Fritzi Coop has a few solid, non-naked fried chicken sandwich options—one is slathered in Buffalo sauce and topped with blue cheese kale slaw, which packs an unexpected amount of funk—to go along with sides like crispy potato waffles and tots. But you shouldn’t stray too far from the Naked Chicken. That’s where it’s at. Beautiful, compromising, Naked Fried Chicken. Naked Fried Chicken is not dredged in any sort of batter or flour or cornstarch or anything else. It is wet-brined then simply dropped nude into the fryer. The result is a salty, juicy, objectively delicious piece of chicken that is 65 percent as satisfying as fried chicken and makes you feel only 40 percent worse than rotisserie chicken. Those of you crunching the numbers at home will realize that those numbers are good. Off-the-charts-good, even. That’s 105 percent of the total amount of chicken points you can achieve.

The brine makes sure the chicken is super juicy and salty on the inside—considerably juicier and saltier than any of the best rotisserie chickens—and the deep fry gives the skin a heftier-than-expected crisp. The oil creates an air-tight environment for the chicken as it cooks, which lets the meat quickly steam itself from the inside out, but the lack of starch on the outside means the chicken doesn’t retain excess oil. You can eat this in the middle of the day and still be a productive member of society.

FritziCoop’s Naked Fried Chicken is a fantastic compromise, and, to quote Hillary Clinton, “Compromise is not a dirty word.”

Josh Scherer is the Senior Food Writer at Los Angeles magazine. You can follow him on Twitter and Instagram @CulinaryBroDown. He thinks fried chicken sandwiches are the world’s perfect food.