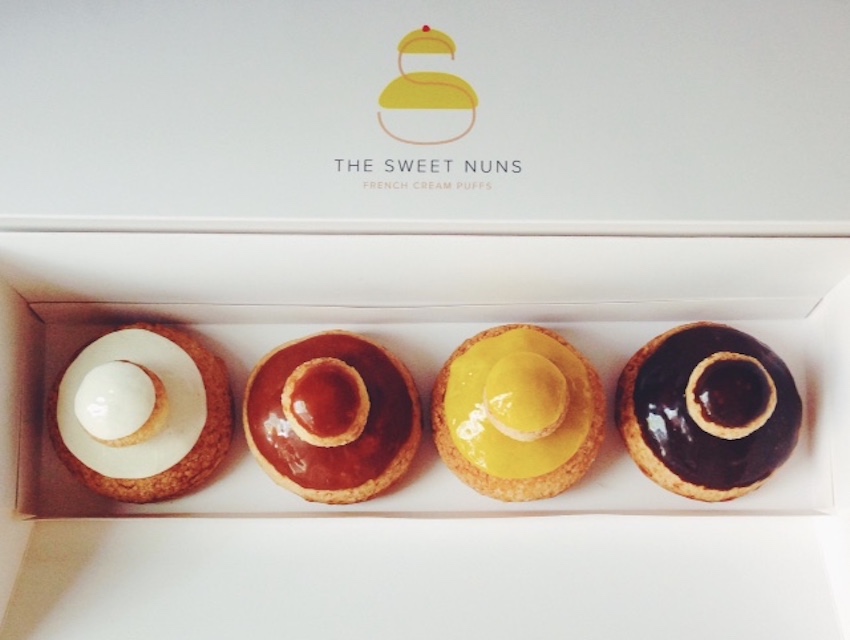 “The perfect cream puff has to be light, dough not too thick, and cream not too heavy. You shouldn’t feel guilty afterwards,” says Rebecca Donze, the pastry chef behind The Sweet Nuns, which opened about a month ago in a Wilshire Vista strip mall. The name of the store is a translation of what cream puffs—its sole offering—go by in France due to a resemblance to the habit-wearing holy women. “I added ‘sweet’ before ‘nuns’ to still raise people’s curiosity and let them guess it’s a pastry before knowing what kind,” she says.

Donze’s pastries are much lighter and more refined than what you find at places like Beard Papa, L.A.’s long reigning cream puff king. Made of choux, the airy (and difficult to master) dough that’s also traditionally used for making eclairs and gougeres, The Sweet Nuns’ classic renditions are filled with cream, ranging from simple Madagascar vanilla and matcha tea to combinations like a luscious dark chocolate with black currants and lemon-yuzu.

“Cream Puffs are really versatile pastries, but simple still. I say ‘versatile’ because you can shape them how you like and fill them with endless cream flavors, even ice cream [for profiteroles]. They call for creativity, [in terms of taste] and superficially since they look like little persons you would dress,” says Donze, who decorates her puffs in bright, delightful colors. For the holidays she even offered them in the likenesses of snowmen, reindeer, and Christmas trees.

A French native, Donze came up with the idea to open a cream puff shop while studying business in Orange County. She returned to France after a year, enrolling in an intensive pastry program at Olivier Bajard’s International Pastry School. After graduating, she began perfecting her craft at Philippe Andrieu’s (the famous pastry chef of the legendary macaron house Ladurée) pastry shop in Bordeaux, followed by a stint as chef de parti at L’Eclair de Genie in Paris.

All of this, she says, was in preparation for opening a shop in L.A., which Donze contends is more “open minded” to the idea of dedicated concepts. “The French are used to ‘bakeries,’ not ‘pastry shops.’ Bakers do bread first and then offer a variety of pastries, and that’s what people are accustomed to,” she says, adding that, outside of Paris, specialty shops are a real rarity. Additionally, L.A.’s penchant for being more “visual” and wanting “to be entertained before eating anything” as Donze puts it, also made it an ideal location for her offerings. “On top of that, you party a lot in LA, and like going out in general,” she says. “There is a great business in the food industry.”

The Sweet Nuns is currently open to the public from 1:00 p.m. – 5:00 p.m. Tuesday – Saturday, and 10:00 a.m. – 2:00 p.m. on Sundays, but Donze’s encourages pre-ordering for customers who want specific flavors. She also offers customized assortments and minis for events.