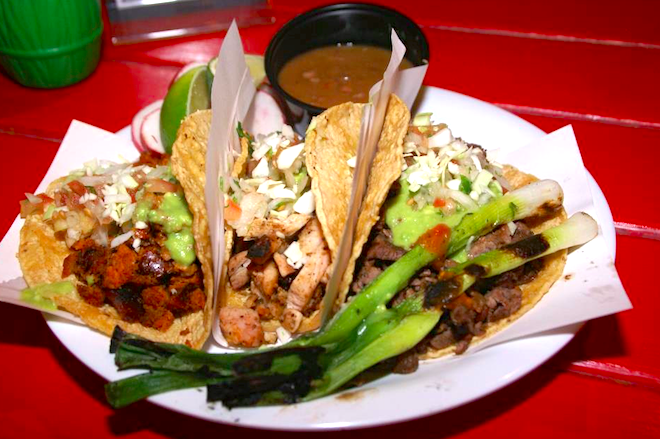 Some call them the original street food culturalists, and I’d agree. L.A. Taco, co-founded by Hadley Tomicki of Grub Street L.A., held a huge bash in downtown L.A.’s Grand Park to celebrate Taco Madness, an annual online tournament of the best taco slingers in Los Angeles. The organizers were pleased by a larger than expected turnout of taco lovers (one even dressed up as a taco), and a solid day of sales for the vendors—some had to restock due to the high demand; Mexicali Taco Co. had to make three trips! The event was free to the public, and food from as many as 10 loncheros and booths was available for purchase, as well as Indio beer. Those who forgot their ID—like Tomicki—kept cool with classic Mexican soda from Jarritos.

I’m calling 2013 the year of the taco. With taco concepts popping up every week from L.A. to N.Y.C to S.F., and a surging interest in all things taco on a global scale, it’s no wonder that L.A. Taco’s Taco Madness has blossomed into a city-wide frenzy.

After weeks of impassioned social wars for the best taco in town, which was determined by popular vote, the 2013 champion was announced during the festivities. Voting went down to the final minutes. By a razor thin margin, Mexicali Taco Co. picked up its 2nd Taco Madness title for their Mexicali-style carne asada.

At the event, a Best of the Day award was given to Mariscos Jalisco by a panel of judges that included yours truly. Their famed shrimp taco stood out among the crowd and was worth a special nod. The competition included chef-driven taqueros, traditional loncheros, taquerias, old school L.A. institutions, fancy restaurants, and Mexican-American joints. There was even a Japanese-Mexican joint from Pico Boulevard’s kosher corridor.

I see Taco Madness grow as the L.A. crew rides the wave of salsa that continues to flood the U.S. from coast to coast. Each year, crowd and critic faves like Mexicali Taco Co. and Mariscos Jalisco will likely battle it out as the enthusiasm for our ever shifting taco landscape grows to a habanero-fevered pitch.

Congrats to L.A. Taco and the winners, and to all of the satisfied attendees in this, the year of the taco.