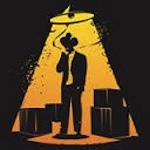 Even though downtown’s newest sexy cocktail bar, Ebanos Crossing—the first collaboration between New York’s Urban America LLC and L.A.’s Luminosity Entertainment—is still in the midst of a soft opening with a projected grand opening date of September 6, it seems people have already made up their minds about it. Specifically, “what’s the deal with that velvet rope” and “that’s so not a speakeasy.”

But I was able to chat with Ebanos Crossing CEO Justin Shapiro and mixologist Phil Ward (former head bartender of NY’s Death & Co) over the phone about their newest collaboration–the two previously partnered up on New York’s Mayahuel—to help clear up some misconceptions as well as get insight on that much-anticipated cocktail menu which is divided into three categories of “El Norte” for American whiskey cocktails, “El Sur” for agave-based ones, and “Ebanos Crossing” for a blend of two spirits.

It’s not a speakeasy: “Though the time period is from the Prohibition era, that’s not something we’re looking to capitalize on,” said Shapiro. “We didn’t want to be another speakeasy. Speakeasies have been done all over the place. We wanted to go in a direction that no one would mistake Ebanos Crossing for a speakeasy. We wanted to insure that we could incorporate the masses.”

About that velvet rope: “Since we don’t have signage yet we just wanted something outside to let people know there is something sexy going on behind those doors,” explained Shapiro. “Once the signage is up, the velvet rope comes off. We actually use it inside to rope off the service area. On a Friday or Saturday, if we’re ending up with such masses that there’s a line around the block, then we’ll need to do something to ensure that we’re not adversely affecting the hotel’s business.”

It’s not a matter of making New York cocktails for L.A.: “To a degree people universally like things that taste good. L.A. isn’t as cocktail-centric as they are in New York or maybe San Francisco, but they’re not doing bad there. You have really great bartenders like Eric Alperin and Julian Cox, there are some good bars in L.A. It’s mostly about how open people are to trying things and you just have to start with things that aren’t too eclectic so you can gauge their palates, see what they’re ready to try. We’ll have 12 to 15 drinks on the menu when it’s finally completed and when you’re making a menu it’s just important to have something for everybody. You have a cocktail for the person who it’s the first time they’ve ever walked into a cocktail bar or something really eclectic for somebody who goes to cocktail bars all the time. And I pretty much think that’s the case no matter where you do it or how much people in those towns drink cocktails.”

Phil Ward behind the bar at Ebanos: “I live in New York which is six hours away [via plane]. I’m sure we’ll have some engagements. I’m going to come out for the grand opening the first week of September. That’s going to be another thing we’ll wait and see how it grows.”

Craft cocktails that don’t take forever to make: “You have to set up your bar very efficiently,” said Phil. “Even in New York you go to some bars and the drinks take long but that’s because you haven’t set the bar up right, you haven’t designed the drinks right and you haven’t trained your staff right. So pretty much all the drinks on the menu were designed with the idea of being for a high-volume bar. We paid a shit ton of money for bar equipment and cheater bottles and all the things we need to really make sure we can get those drinks out fast.”

The spirits selection process: “It’s all just based on what’s in the bottle. As far as tequila goes, tequilas are really hard now because most of the brands have been bought by corporate conglomerates and the quality has really went down a lot so we don’t have nearly as many tequilas as a lot of places because we don’t want to carry tequilas that we don’t believe are making the best product possible. As far as mezcal goes we’re just looking for artisanal mezcal producers who are still using traditional methods. And then whiskies are in a different place but we just wanted to have a small, select list of things. The rums we’re basically just trying to pick some rums from different countries and regions because rums are produced in over 60 countries around the world and you want to have a good blend but be selective.”