Home Uncategorized The Top Chef 10: What We Learned From Last Night’s Episode 6 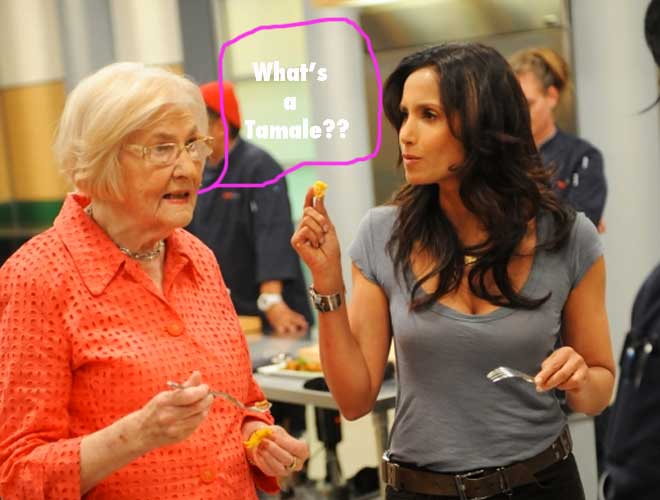 10. The Chihuly Gardens are awesome on acid

L.A.’s own Micah taught us a couple new words last night when talking about his mixed race. Too bad we can never use either of them. Especially “Blaxican.”

8. Marilyn Haggerty doesn’t know what a tamale is

The Grand Forks Herald food critic, who “went viral” after a particularly snark-free Olive Garden review earlier this year—judged the Quickfire challenge, during which she dropped some Haggerty classics. Our favorite: “It has a nice combination of tastes.” Priceless. But apparently tamales haven’t made their way to North Dakota. She called Micah’s a taco. We’d love to see Bill Esparza tackle that one.

7. Truvia has 75% less calories than sugar

Really Top Chef? Could you please try to be a little more subtle with the product placement in the future? We feel dirty.

6. Josh should stop saying that he’s “known for pork”

If not, he may soon become known for losing.

5.  They make waffles in Belgium

No shit? Thanks for the heads up, Bart. Even Marilyn giggled at that one.

The honest chemistry between the famous couple (and expecting parents) had us snuggling our cat a little closer (before it scratched us and ran away …Le sigh). That Bachelor impression? Gold. Celebrities who eat are just awesome, aren’t they?

3. We’ve got a new hometown frontrunner

Go Brooke! Your double-win last night had visions of stuffed squid and cheddar-apple crostadas dancing through our heads.

2. Friends who eat squirrel heart together, stay together

Damn Chris Pratt! When you said you were an adventurous eater, you meant it. Sharing the heart of a squirrel—which you hunted down, mind you—with your brother-in-law will indeed bond you for life. And also probably give you rabies.

1. Meeting Anthony Bourdain is “a hoot!”

No, YOU’RE a hoot Marilyn! Just adorable. Time for your own show (and a trip to Mexico).